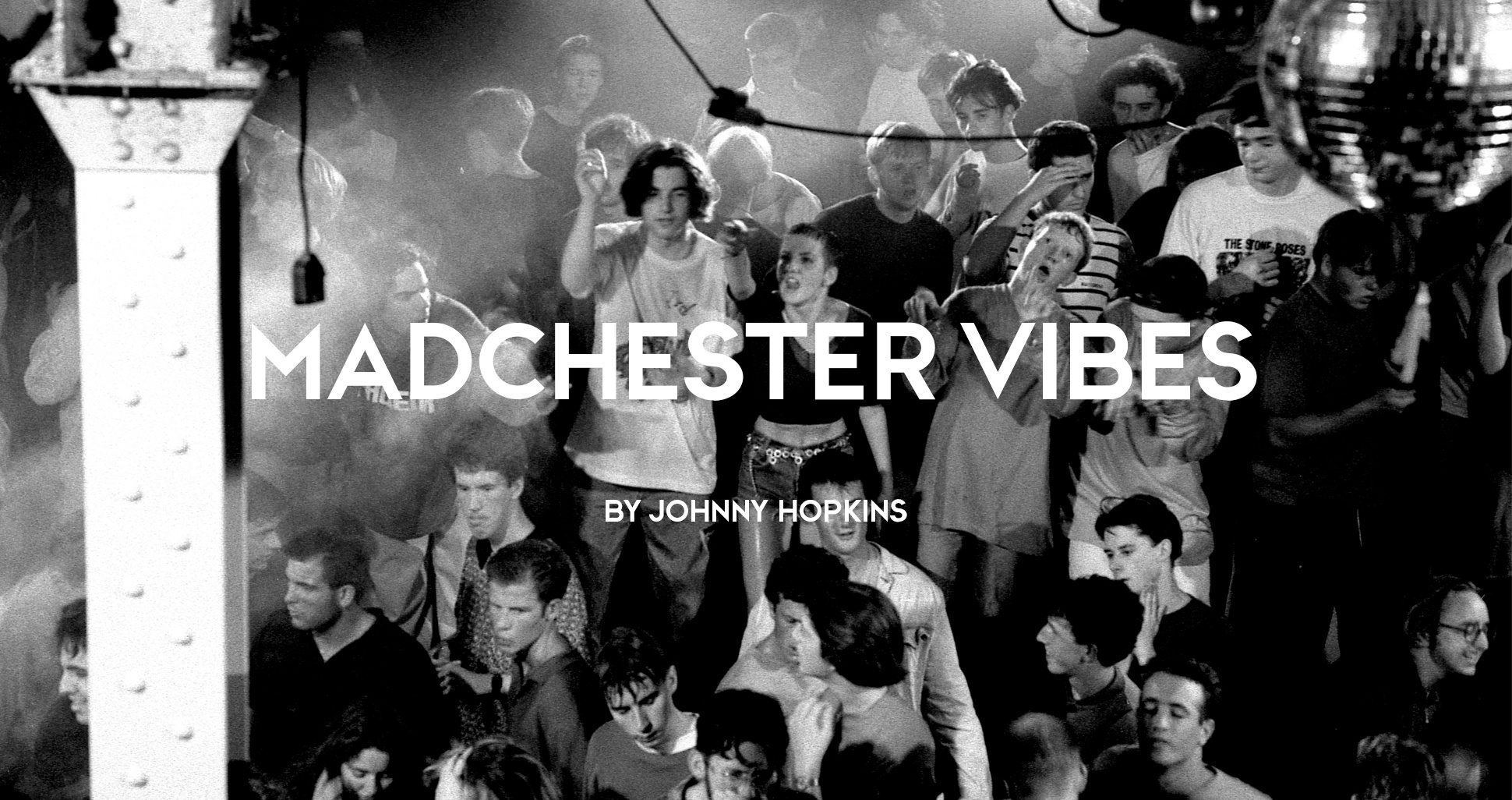 n the early 80s Manchester emerged as a bastion of independent music. Originally characterised by a darkness with bands such as The Smiths and Joy Division, by the late 80s a more uplifting sound was emerging. Coming together with Acid House in 1988, Manchester became Madchester with a new sound and people dress in Baggys. 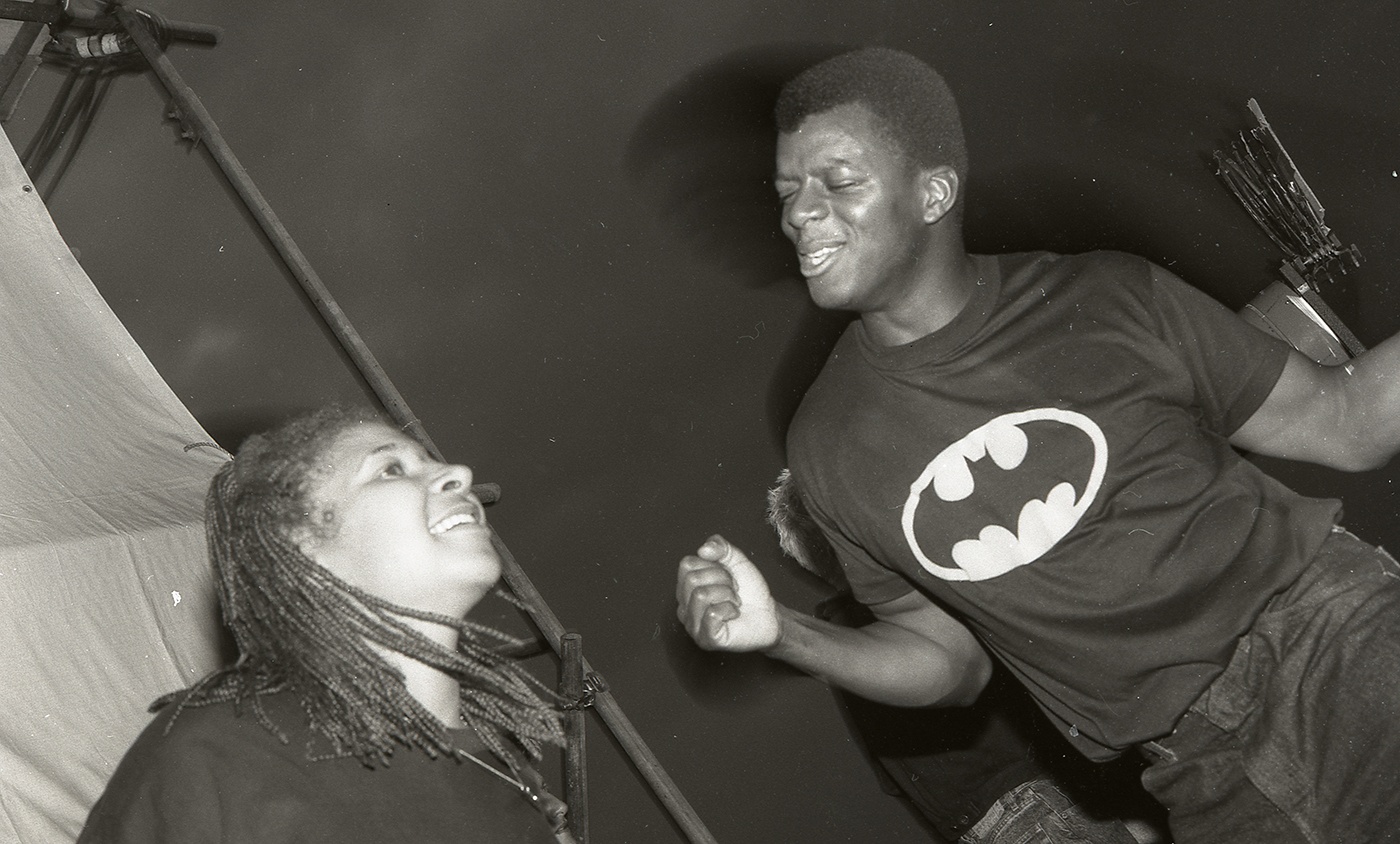 From the textile industry in the 19th century to music and football in the late 1980s Manchester has been a driving force. Inevitably these three strands would weave together. Indeed, as post-industrial Manchester re-invented itself, old textile factories and warehouses became rehearsal spaces and venues. The miserablism of Joy Division and The Smiths gave way to the post-Cold War positivity of Madchester. Lancashire’s youth became 24 Hour Party People decked out in gear by new local companies like Gio Goi and Joe Bloggs.

The Madchester/ Baggy look conveyed a confident Northern identity, with its roots in earlier working class street-styles, Scallies and Perry Boys, which were distinct to North West football crowds, but part of the broader Casual subculture. Madchester coalesced around a network of places including the Hacienda, International I and II venues, and the Eastern Bloc and Piccadilly record shops. Documenting it were M62, City Life and Debris magazines. The End fanzine (Liverpool) linked music, fashion, football, and politics.

DJ Dave Booth (Playpen/ Hangout) provided the soundtrack of 60s psych, soul and emerging indie acts like the Stone Roses. Like Acid House, young people came together at clubs and gigs like Spike Island cutting across the lines of class, race, gender, sexuality and musical taste. Ravers rubbed shoulders with indie kids and football fans led by their shaman Bez with his freaky dancing. Ecstasy increased this sense of community/ communion.

The most distinguishing feature of Baggy style was flared jeans. The black drainpipes of C86/ shoegaze were replaced by extra wide flares resembling a cross between the local Northern Soul scene and the original 1967 Summer of Love.

The Manchester flare revival kicked off in 1982/83 when two former denizens of legendary Northern Soul club, the Twisted Wheel, sourced deadstock for their clothing businesses. Flares flew out of Phil Saxe’s Gangway and Joe Moss’ Crazyface and onto the terraces. The nascent Mondays were amongst the very first to wear them. By 1985 flare fashion had died. Saxe moved onto ‘baggies’ – baggy all the way down to the 16-inch hems. The Mondays were the first to wear these too. John Squire (Stone Roses) was an early convert.

Nevertheless, a small gang around the emerging Mondays/ Roses remained flare obsessives. Despite onlookers derisively dubbing them Baldricks after the Blackadder TV character Cressa, and his mates were influential. Cressa’s purple flares were notorious. In 1987 and 1988 they scammed their way into i-D. Wearing 25-inch flares, big outdoor jackets and Reebok trainers (made locally in Bolton), they were described as a “surreal youth cult roaming the Hacienda”.

As former punks and scooter boys the Roses, came late to flares. Indeed, the photos on the inner sleeve of their debut album (1989) show Squire in baggies and his band-mates in straight leg jeans. However, Reni is already wearing the cricket hat with which he became synonymous. Later that year Cressa persuaded Ian Brown to wear flares. Brown told Melody Maker’s Simon Reynolds that he wore 24-inch flares “for that slight swish” and to get a reaction.

Baggy t-shirts (sometimes bootlegged) were essential with designs on the front, back and often down both sleeves. The images moved with the dancer and were intriguing for anyone watching on ecstasy. The ‘AND ON THE SIXTH DAY GOD CREATED MANchester’ t-shirt by Identity in Affleck’s Palace was very popular. Even Madonna and Jean-Paul Gaultier were spotted wearing them. Identity produced other regionally-focused designs including ‘Manchester: North of England’, ‘Born in the North, Return to the North, Die in the North’ and ‘Woodstock 69: Manchester 89’.

When the Roses and the Mondays appeared on the same Top Of The Pops episode (November 1989) with ‘Fool’s Gold’ and ‘Hallelujah’ respectively, Brown and Mondays drummer Gaz Whelan wore the same Jean Paul Gaultier jacket. Few fans could afford such clothes but they could improvise, often getting gear from Stolen From Ivor (whose yellow bags became cool items themselves) and Joe Bloggs whose everyman name and the clothing’s affordability gave it anti-designer brand appeal.

Elsewhere – London, Liverpool or at Sunshine Playroom (Brighton) – there were regional differences. Football tops were popular but flares were avoided.

Indeed, the cover of The Farm’s ‘Stepping Stone’ single (1990) featured a sheep in flares, red Kickers and a cricket hat – seemingly a dig at the stereotypical Madchester look. The Farm preferred Paul Smith gear and saw themselves as ‘neo-mods’. Their understated everyman style even made the cover of The Face.

“It was an incredible time – life changing for everyone involved and people thought anything was possible. Some started fashion labels, others became DJs or promoters, and there was a real spirit of togetherness and cooperation” Peter Walsh , Madchester and The Hacienda Photographer 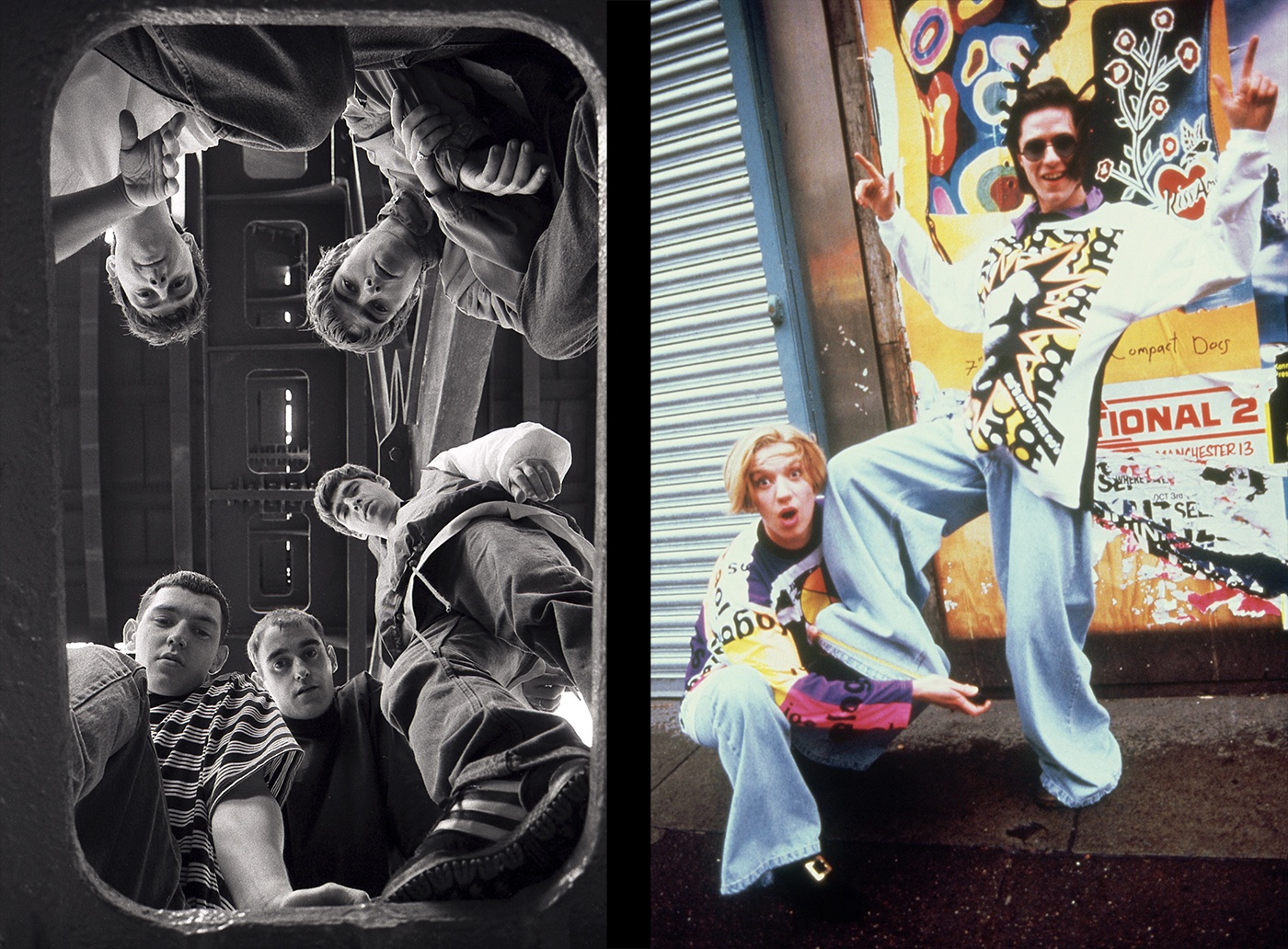 The Rise of Britpop

While Blur dressed down Oasis’ style was more aspirational and modern like the original Mods and Casuals. Liam Gallagher looked cool in an M&S jumper and a Next anorak at early gigs but he soon graduated to luxury labels like Stone Island. This broad mix of brands was common on the terraces and with Britpop fans.

Mod parkas and desert boots were defining items. Button-down shirts were worn untucked. Heavy duty anoraks were zipped right up to the top. Upmarket Henri Lloyd sailing jackets (from Hurleys) were appropriated for going out. All delivered with Manc-style swagger.

Bootcut jeans and cords were essential. Clarks Wallabees in suede, Adidas Gazelles and shell-toed Superstars were go-to footwear. Yogi shoes with negative heels filtered through in the late 1990s.

Perhaps mindful of PJ Harvey and Mambo Taxi’s exhortations not to dress to satisfy the male gaze, Britpop women swerved tight dresses and high heels for jeans, tops and trainers. Madan, Debbie Smith, Louise Wener, Justine Frischman were strong and articulate role models. One set of female fans, known as the Fairies, were distinctive in outfits topped off with fairy wings.

Britpop looks could be spotted from Birmingham’s Jug of Ale and Hull’s Adelphi to the Hacienda through to Oasis mega-events at Knebworth and Loch Lomond (1996) as well as at London haunts like Good Mixer, Dublin Castle, Heavenly Social and Smashing with its illuminated dancefloor. Blow Up (London) and Brighton Beach (Leeds) featured a microcosm of Mod-related looks – girls in low heels, high necklines, black bobs and geometric prints shift dresses, suited and booted scooter boys, Northern Soul kids, freakbeat phantoms with shaggy hair, cravats and winkle-pickers alongside boys in skinny Blondie t-shirts and eyeliner.

In Manchester fans still shopped at Affleck’s Palace or the more stylish Aspecto. London had Duffer, 6876, Acupuncture and Hope & Glory as well as Burro, a shop/ label popular with fans and stars like Jarvis Cocker and Paul Weller.

In Baggy and Britpop you could aspire to dress like Ian Brown or Liam but you could actually be one of the other band members. Accessibility was important. Bands and fans could combine rock star style and everyman appeal. 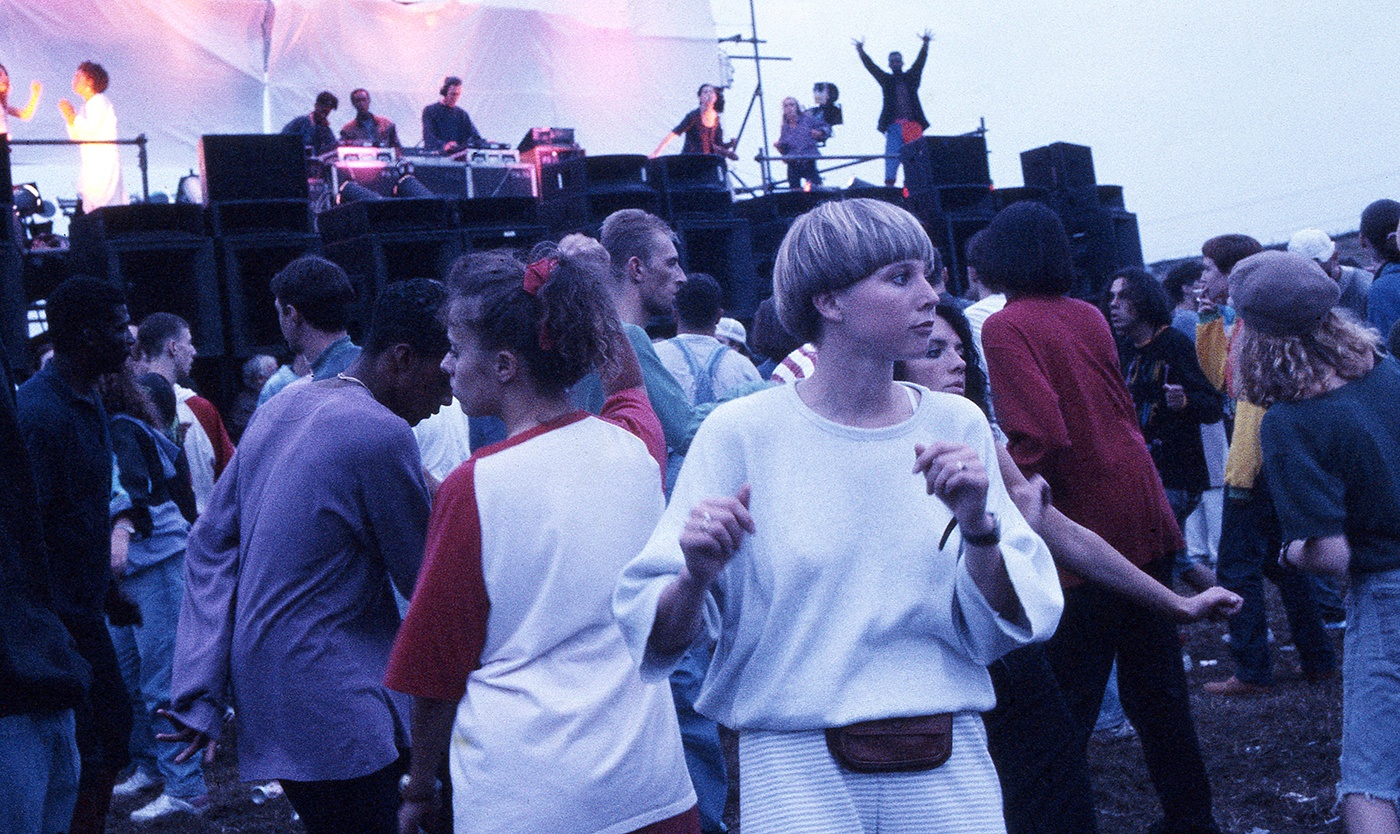