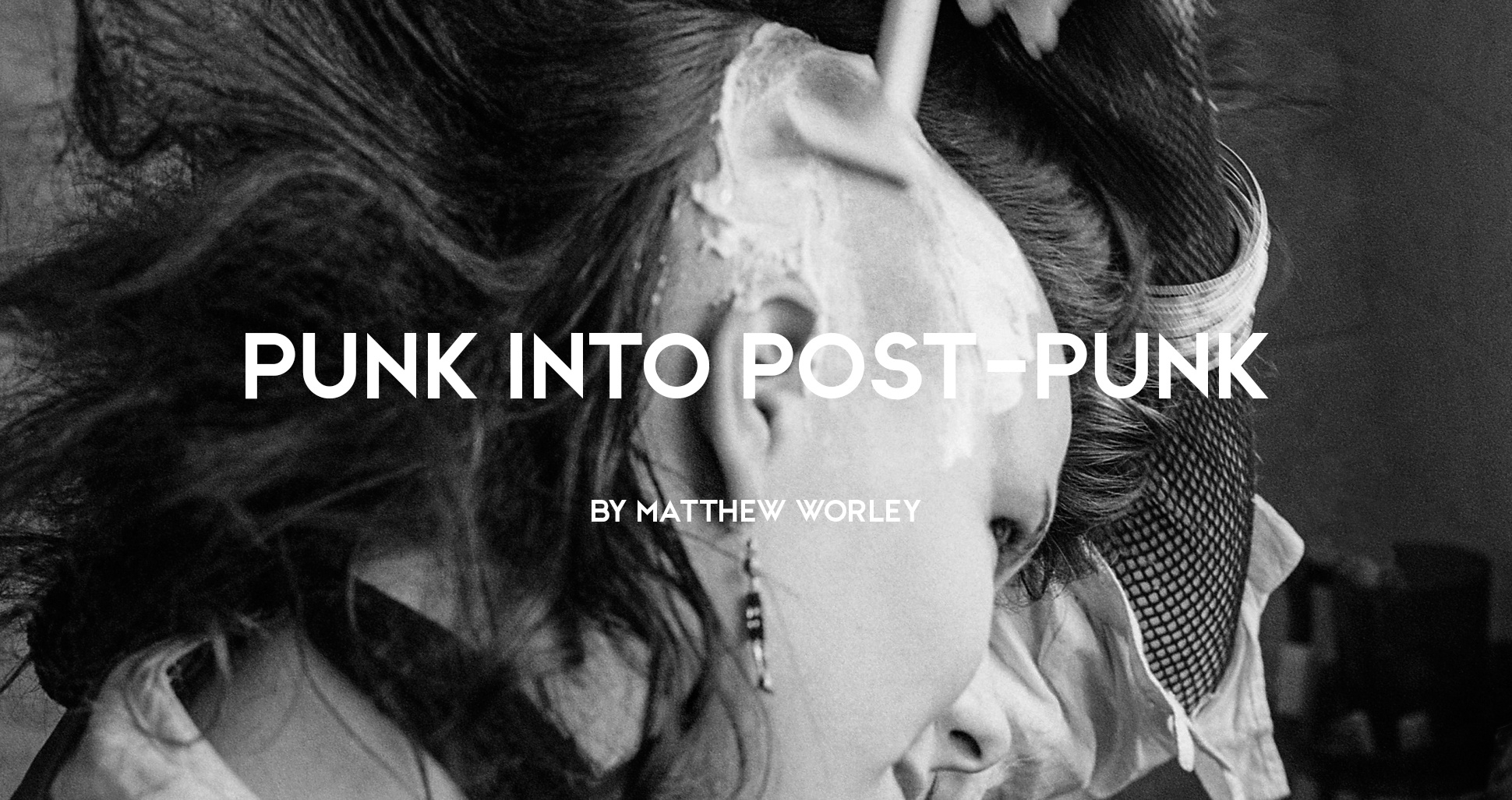 ‘Anarchy In The UK’ hit the headlines and a punk revolution was underway. Arguably one of Britains most recognisable youth tribes, the Punk movement emerged in the late 70s with mowhawks, safety pins and a load of attitude. From Punk poster boys Sex Pistols and The Clash, to feminist Punk heroes The Slits and X-Ray Spex, the Punks pushed boundaries across the board. 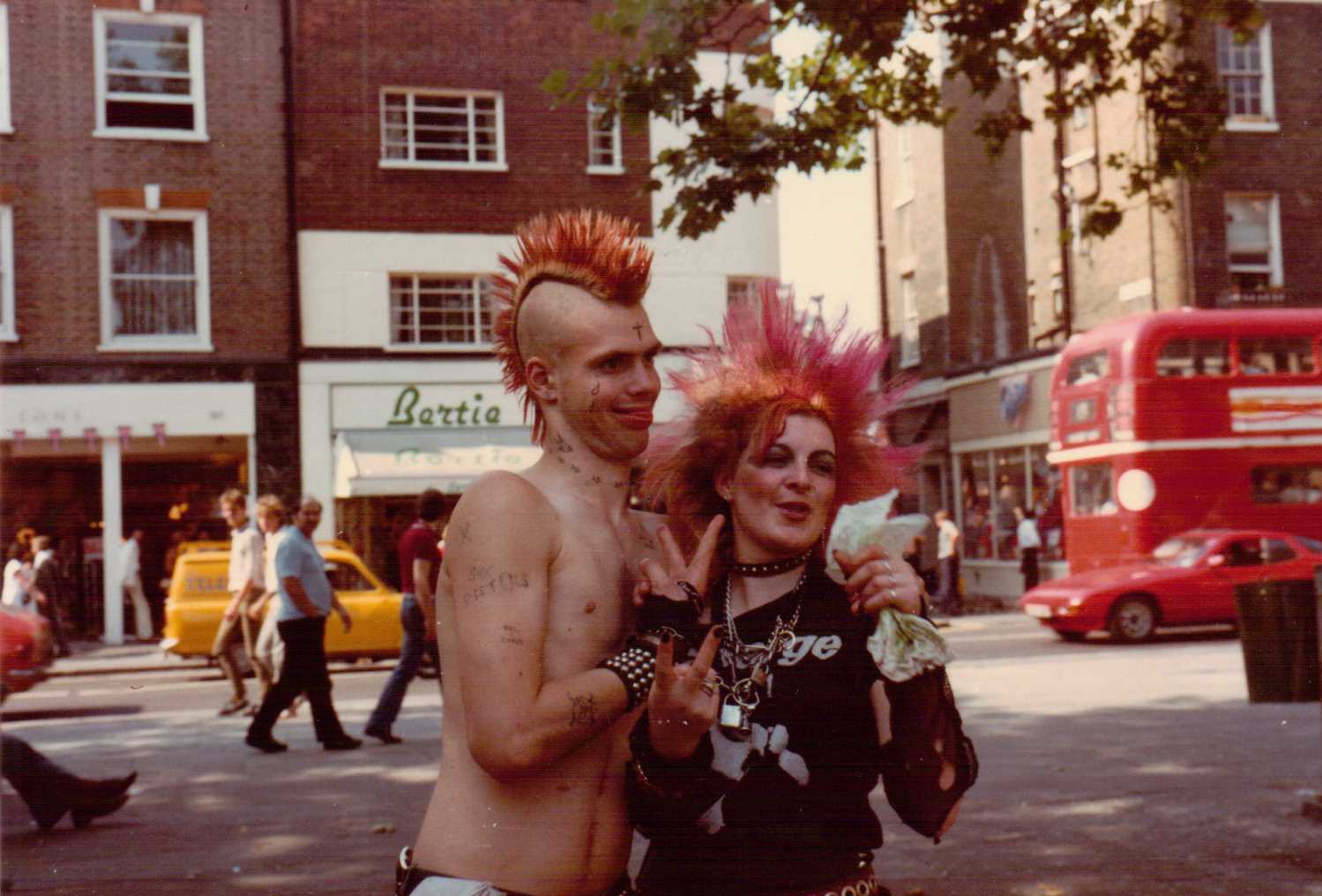 British punk emerged in 1976, coalescing around the Sex Pistols and spreading – virus-like – into the suburbs, provinces and cities of the UK. Almost from the outset, punk proved a contested cultural space. Its form had American provenance; its point and purpose became the subject of playground/pub/media debate ever after. In the UK, however, punk was born from SEX (the shop established by Malcolm McLaren and Vivienne Westwood on London’s Kings Road) and disseminated first by Sex Pistols and then by the countless groups they inspired. Though closer inspection may find continuities running from early rock ‘n’ roll through the 1960s counterculture, Glam and onto the mid-1970s, punk was presented as a negation of pretty much everything: a line drawn in the cultural sand to reboot and rejuvenate youth culture as a site of provocative fun, protest and imagination.

Style-wise, the clothes designed by McLaren and Westwood helped forge an aesthetic of rips, fractures and tensions, capturing perfectly the darkening mood of the 1970s. Fetishwear became fashionwear; clashing political symbols confused and provoked; art school practice was filtered through urban iconography; creativity generated DIY politics; to act took precedence over receiving/consuming. Best understood as a way of doing, punk informed everything from music through design, fashion, artwork, writing and performance. Inspired by Mark Perry’s Sniffin’ Glue (1976–77) and Buzzcocks’ releasing their Spiral Scratch (1977) on their own New Hormones, punk initiated an alternative media of independent labels and fanzines to disseminate the teenage news. Likewise, punk’s sound was abrasive, (often) sped up and urgent. Ultimately, however, it would evolve into an array of post-punk styles, dissipating into the 1980s to inform scenes that maintain today.

"British punk emerged in 1976, coalescing around the Sex Pistols and spreading – virus-like – into the suburbs, provinces and cities of the UK. Almost from the outset, punk proved a contested cultural space." 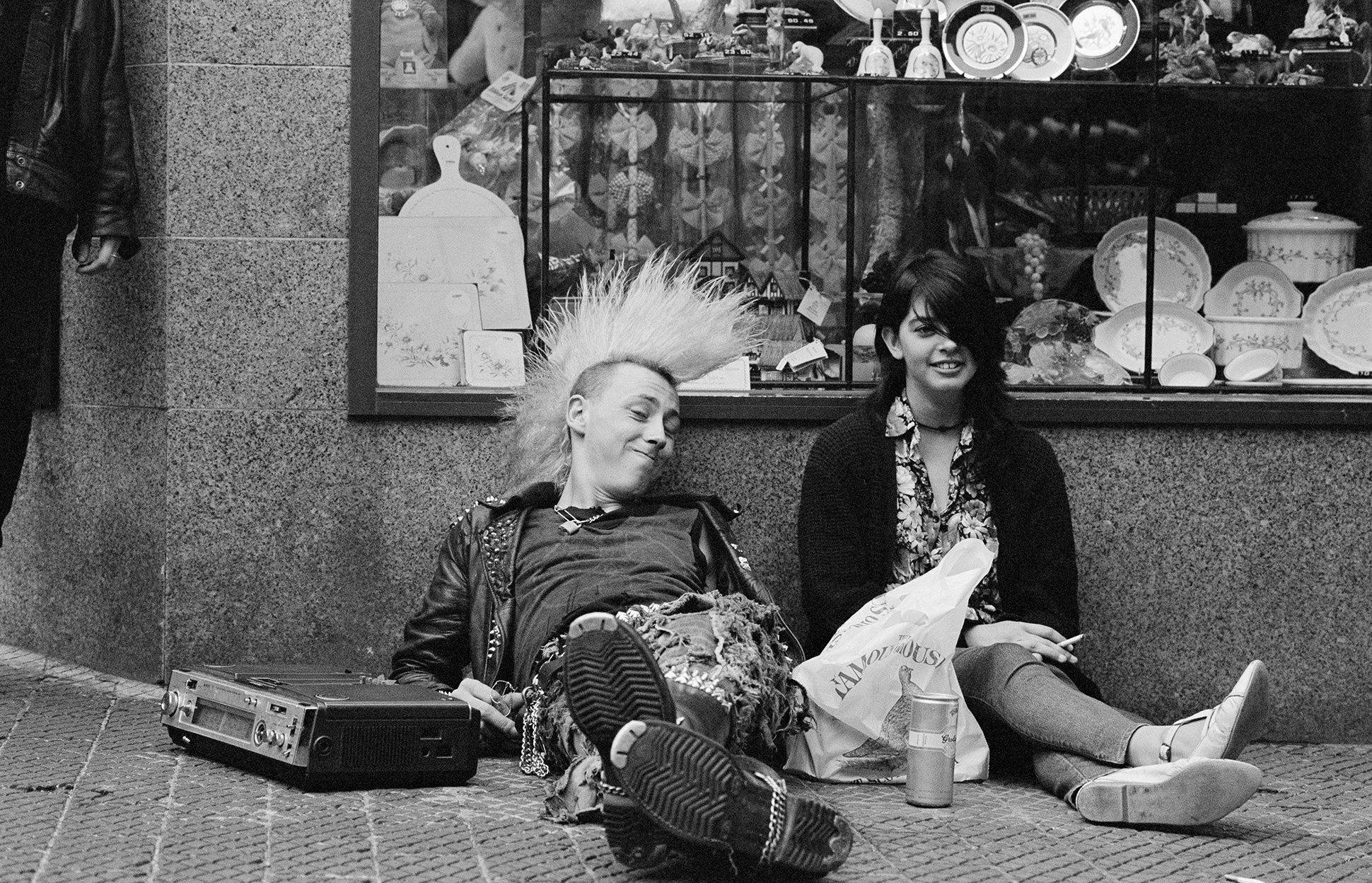 Punk’s moment (1976–77) threw up an array of bands, clubs, fanzines and record labels. The moral panic that followed the Sex Pistols’ ‘foul-mouthed’ appearance on teatime television in December 1976 ensured punk moved overground into the wider public consciousness. The furore surrounding the Sex Pistols’ ‘God Save the Queen’ (1977), released to coincide with the Jubilee and wrapped in a Jamie Reid sleeve that defaced Elizabeth II, added seditious intent to punk’s delinquency. Even then, beneath the tabloid scare stories, bands such as The Clash, X-Ray Spex and The Adverts proffered songs of socio-cultural critique, while Siouxsie and the Banshees, Wire, Subway Sect, The Slits and others hinted at something other. Across 1977–78 punk moved into the provinces, spawning local scenes and evolving towards post-punk sounds and sensibilities. Joy Division, from Manchester came to best define the shift from anger to alienation. But the late 1970s was also the period of Rock Against Racism and subcultural revivals; punk-inspired experimentalism and potent social realism. Parallel to punk, industrial culture emerged via Throbbing Gristle and Cabaret Voltaire, while John Peel’s radio show offered late-night glimpses into ever-widening punk possibilities. At the decade’s end, 2-Tone and New Romanticism had evolved from punk’s diverse milieu, cultivating new styles in the process. Pop was reimagined into the 1980s; alternative charts were created to account for the burgeoning underground.

The 1980s saw punk splinter into various factions. Oi! emerged as the ‘beat of the street’, blunt punk rock informed by Sham 69 and keen to align with skinheads as a more resonant embodiment of punk’s claims to proletarian roots. Anarcho-punk tribes gathered around Crass and Poison Girls, pushing punk politics deeper into protest against war, vivisection, the City and everything else representing ‘the system’. The Exploited headed-up those keen to pronounce ‘punk’s not dead’, their singer Wattie Buchan perfecting the soon-to-be-clichéd Mohican. From the cracks in between a ‘positive punk’ emerged, drawing from the macabre sensuality of early Adam and the Ants and Siouxsie and the Banshees to pave the road to Goth. Spinning off at tangents, independent labels such as FAST, Factory, Postcard and 4AD cultivated their own aesthetics, while those holding fast to punk’s DIY ethos forged an ‘indie’ world of askew pop that often looked back to various sixties influences in an effort to avoid the descending clouds of the Thatcherite eighties.

Come the 2020s and punk still stains the cultural fabric. Nostalgia, that most un-punk of notions, hangs heavy over festivals and ‘back in the day’ bore-stories. Co-option has led to punk graphics selling credit cards and burgers (just as Jamie Reid predicted they would). But dig deep and there remains much to rediscover and much to utilise from punk’s cultural impact. There was a time when every village and town centre came replete with punks huddled in a bus shelter or on steps handy to sit on. Now, the works of punk-informed artists such as Linder or the always-changing-always-the-same approach of The Fall offer points of inspiration. DIY remains a spur to agency. Punk’s negation was always best-used as a source of creativity; a means to reassemble and recreate; to build from the ruins.

Matthew Worley grew up on the periphery of the punk culture, and found himself fascinated by it. He is a professor of Modern History at University of Reading, with an interest in twentieth-century British culture and politics. He co-founded the Reading-based Subcultures Network of academics researching in youth and subculture movements. He has published No Future: Politics, Punk and Society, 1976-84. 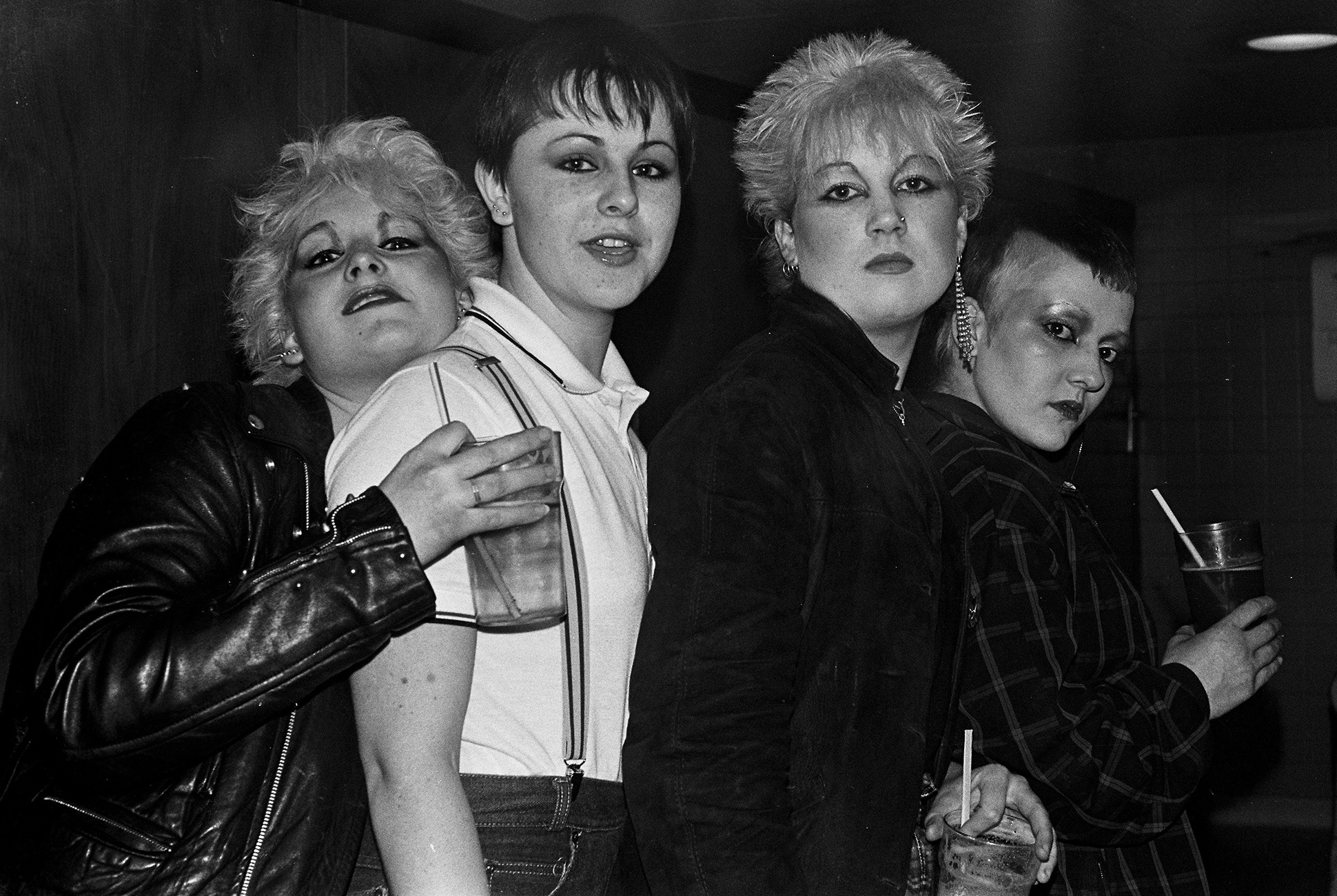