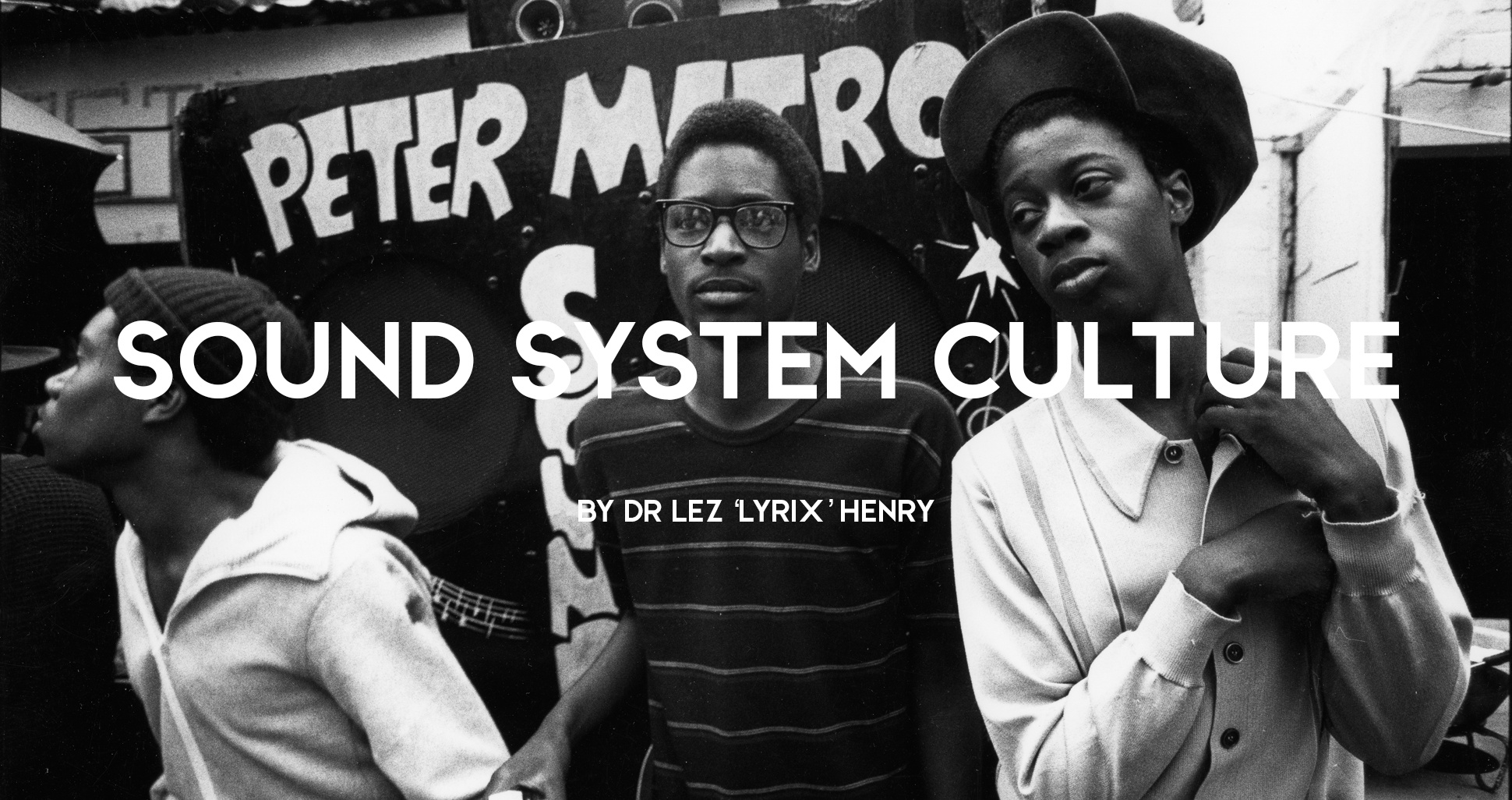 The biggest street party in Europe, Notting Hill Carnival hosts over 30 sound systems that cater to over a million visitors - but where does this incredible music culture come from? This exhibit will delve into Reggae Sound System culture, tracing it from its roots in Jamaica to the streets of London in the 1950s. 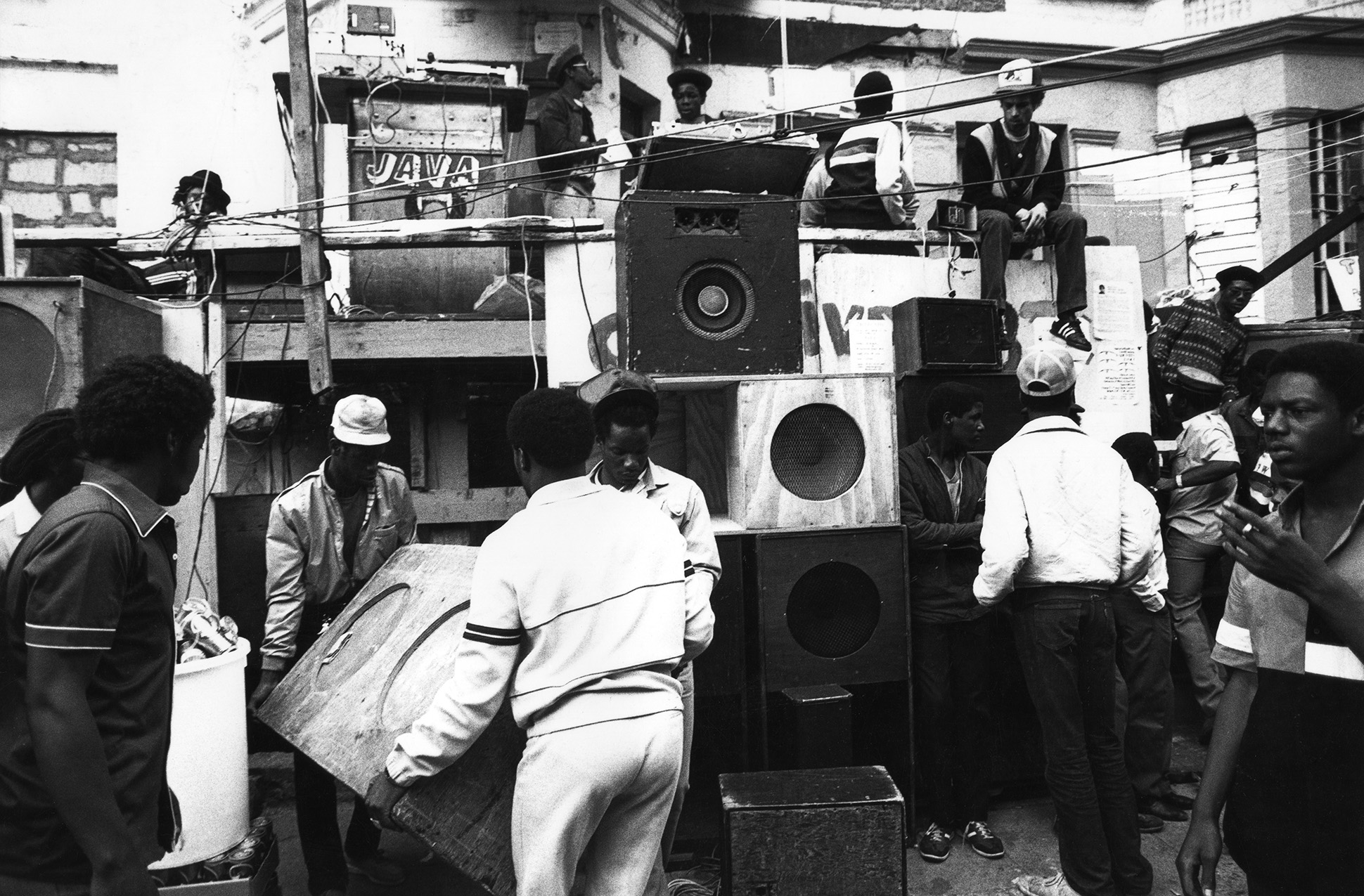 We set out we speaker innah three high stack,

the bass, the midrange and the tweeter pon the top,

and when the bassline drop,

we build the box solid them can take the impact,

and when we play the riddim crowdah people start rock,

dem know Ghetto-tone ah the cream of the crop!

The above extract from a lyric I used to perform, way back in the day, speaks to how the Reggae Sound System is known for supplying perhaps the most drum and bass-heavy experience one can have, where the vibe is level and the atmosphere is pure niceness. This is testimony to the global power of Jamaican musical culture, which changed the way music was recorded, transported and consumed in private and public spaces. Because the way we currently listen to music bears this mark for it is from this culture the idea of having custom built speakers and awesome amplifiers, in the car or home, comes from. The culture emerged in Kingston, the capital city of Jamaica, in the 1940s where customised Sound Systems would play American rhythm and blues music and other forms of popular music in the streets or in yards to ever growing audiences. These street parties/dances would soon become dominated by arguably the first commercially viable Sound System, ‘Tom the Great Sebastian’ which was owned by the businessman Tom Wong and would become the blueprint for what we experience up to this day.

At this point I wish to make clear that Sound Systems cannot be reduced to a ‘large mobile disco’, as there is an aesthetic value that far transcends any such description and by the mid-1950s customisation was the norm and valve amplifiers capable of playing up to 30,000 watts were the norm. These were complemented by ‘stacks’, the cumulation of speaker boxes that stand predominant, where the first layer is bass boxes the size of wardrobes – as witnessed here – with midrange speakers next and finally tweeters on top. Additionally, a Sound System is also known as a Set, or The Set, probably because you have to ‘set-up’ and ‘string-up’ (wire up the speakers etc.) before you can ‘play out’. Another reason for this could be that in Jamaica they differentiate between a Component Set (Rack System), which is the type of stereo you would play music on at home, and ‘The Set’ as the Sound System you would hear in a Reggae dancehall. In fact, during the 1950s the most popular Jamaican Sound System DJs ever would emerge, Clement ‘Coxsone’ Dodd with his immortal ‘Studio One’ label, and Duke Reid ‘The Trojan’ with his ‘Treasure Isle label. Their music is still popular and are staples of any proper Sound System experience, whether in the original recorded form or as a version with a new take/performance on it. Equally, any singer or Deejay (Jamaican style toaster/rapper/MC) worth their salt will want to perform on these classics, live and direct in a Reggae Dance-hall style, as they are still the benchmark for measuring whether you can ‘ride di riddim’ or not to this day.

The images featured here demonstrate the nuanced nature of Outernational Sound System culture and the picture with Vincent George Forbes AKA Duke Vin, posing with one of his speaker boxes, is significant because he began his career with ‘Tom the Great Sebastian’ in Jamaica and became the first Sound System owner in the UK in 1955. His Set was built and made famous in the Ladbroke Grove area of West London which since the 1960s has become famous for the Notting Hill Carnival which is an event where you are guaranteed to hear the best Sound Systems from across the UK and beyond. This is captured in many of the images seen here, like the one with Peter Metro Sound, which was named after one of Jamaica’s best ever Deejays, and also in the picture where Java were setting up to play in the carnival during the 1980s. You will notice it takes two to carry the speakers and these are in fact the smaller ones. I say this because it is also popular to use the ‘4-Phase’ or ‘Quad Box’ which had four 18 inch bass speakers and you can imagine the sound and feel of them and they were the ultimate weapon during a ‘Sound Clash’, because if your Set was ‘heavier’ you could literally ‘drown out’ the opposition by increasing the volume so you couldn’t hear them playing. 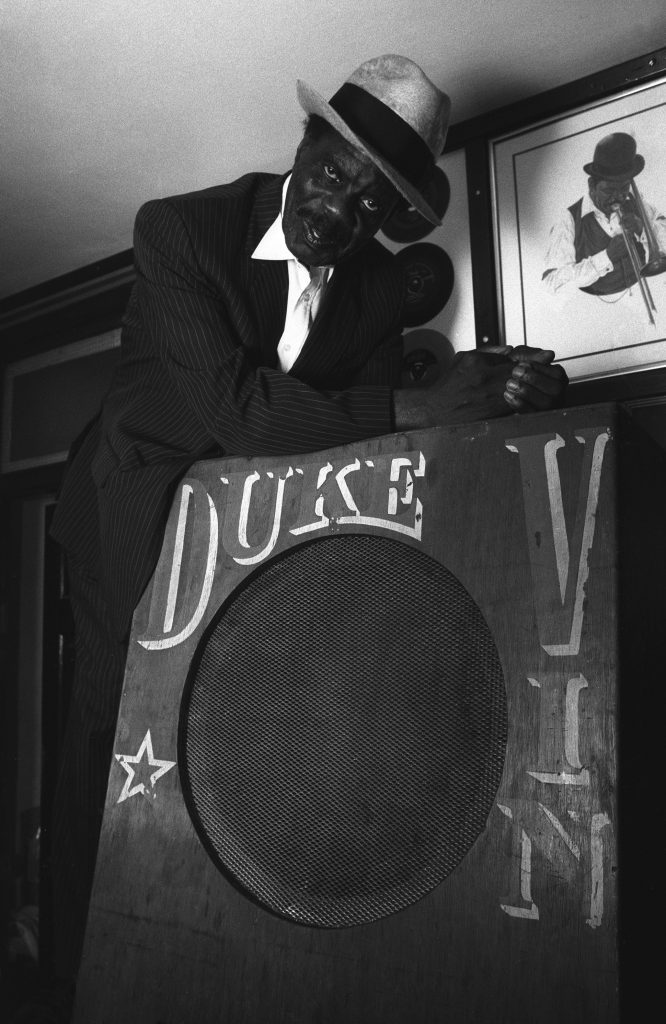 Performativity is another aspect that is central to the culture and you will see in various images the Deejay chatting their lyric, accompanied by the selector who picks the tunes and the operator who will control the sound volume etc., mix down the performers and ‘pull up’ the track if the crowd request it. You will notice that there is a female deejay plying her trade, unmoved by how cramped the conditions were because there is generally no separation between the audience and the performer, which is one of the unique features of this musical culture. Similarly, there are occasions, usually if there is the threat of rain, where the Sound System will operate from the back of the Sound Van as evidenced in the photo where the crowd are giving the performers a salute as a sign of collective approval. There are also many images with Deejays performing individually or as a duo sharing the mic on a Set which was commonplace, as well as an image of the Reggae singer Roger Robin of the world famous Southeast London based ‘Saxon Crew’, With D Rowe at the mixing desk and Junior Sandy in the background. Similarly, there is an image of the Saxon Crew posing with one of their releases which exemplifies the continuity of the Sound System owner as record producer, witnessed form the outset in Jamaica where the culture was born. Another crucial aspect of the culture is seen in the images where people are just reasoning or chilling ‘on road’ as Sound System culture is a people culture, a street culture that breaks down all social barriers and unifies people in a fashion that is pretty unique. The final note is an overly sad one for me as the young lady featured in the picture with her hat turned backwards is the late great Deejay Mrs Irie, sister of Tippa Irie, who was sadly taken from us but her legacy lives on as one of the pioneer British female MCs. 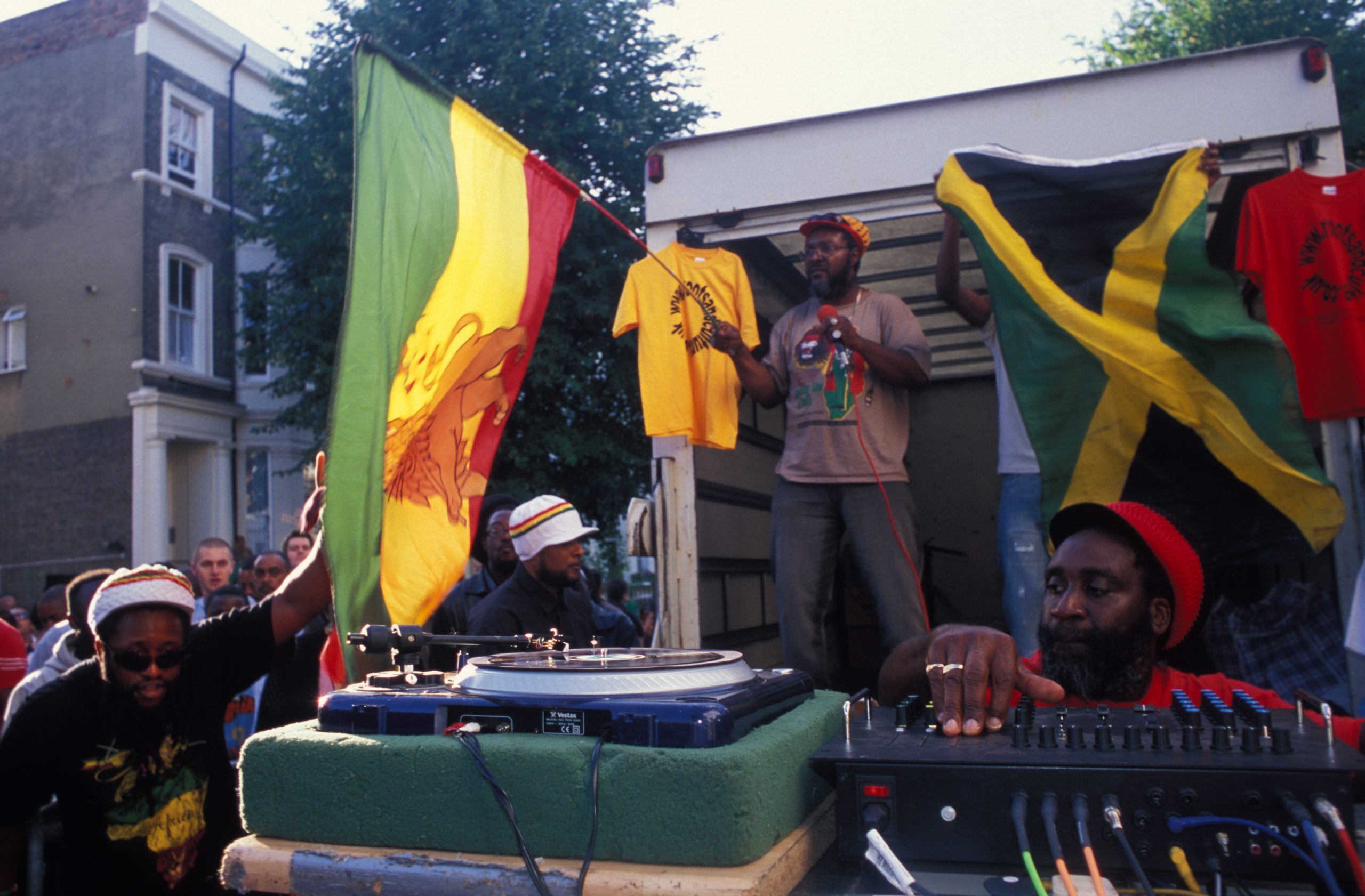 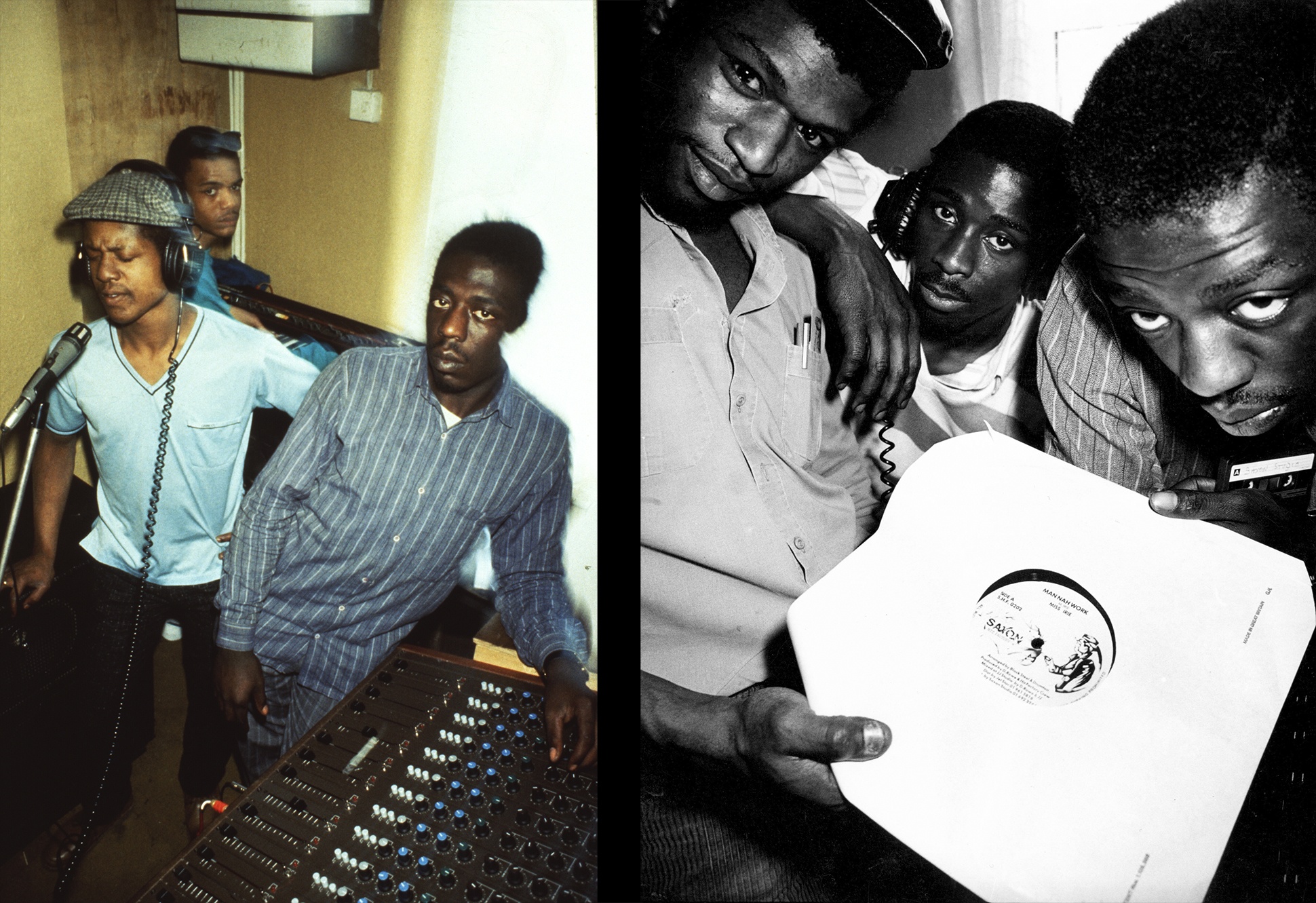 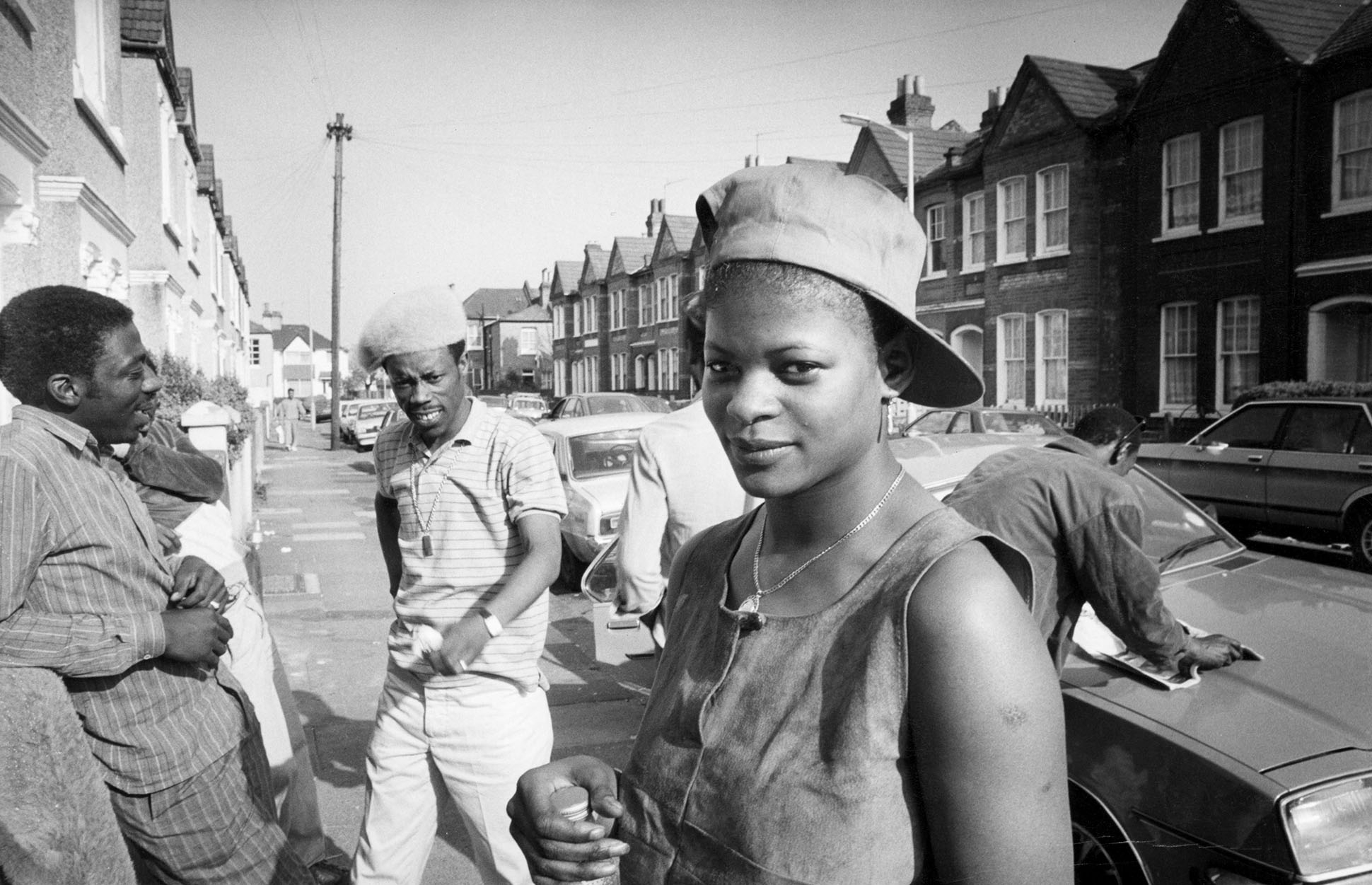 Dr Lez ‘Lyrix’ Henry is an Professor in the School of Human and Social Sciences at the University of West London. He is also a writer, poet and the Reggae performer Lezlee Lyrix. 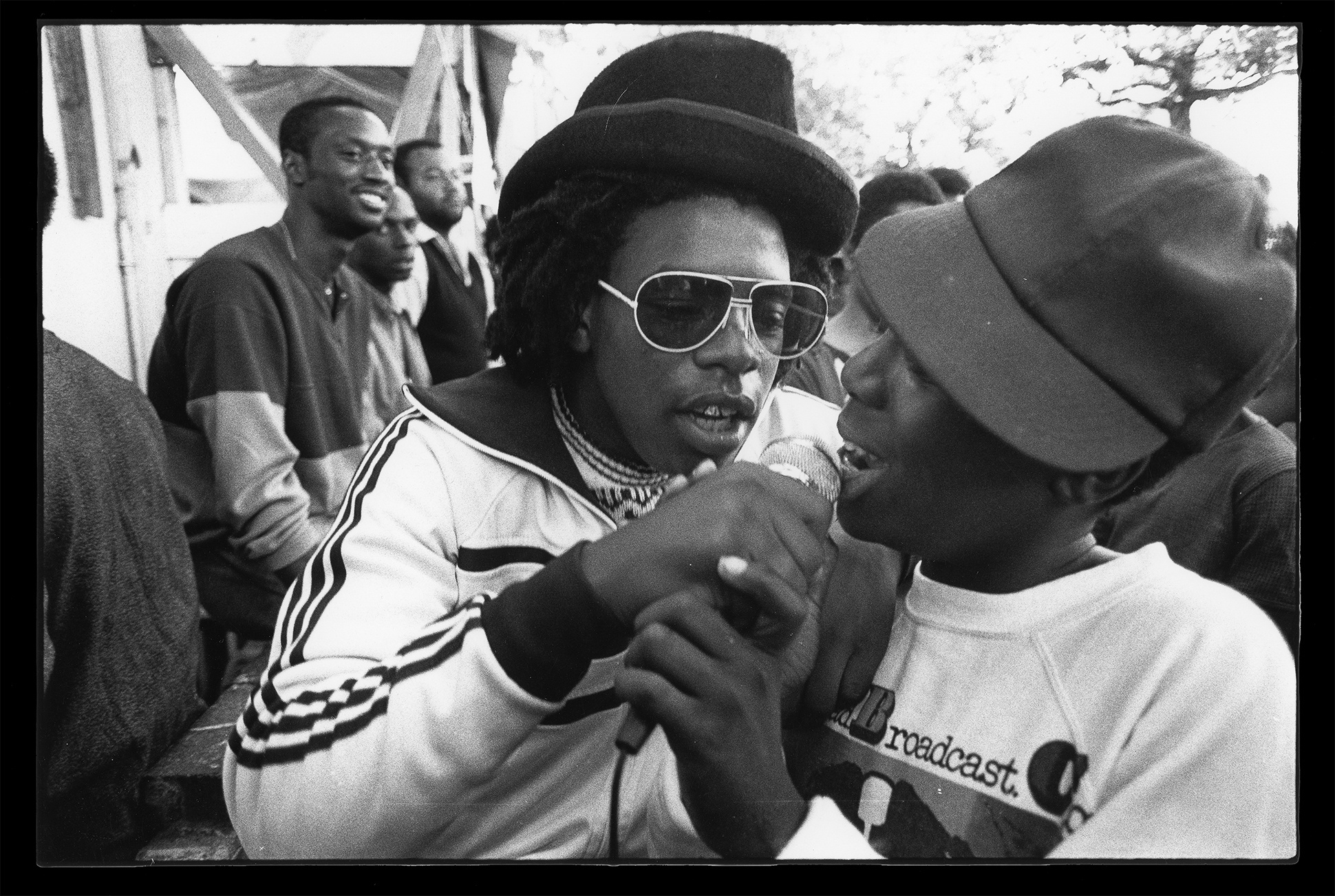