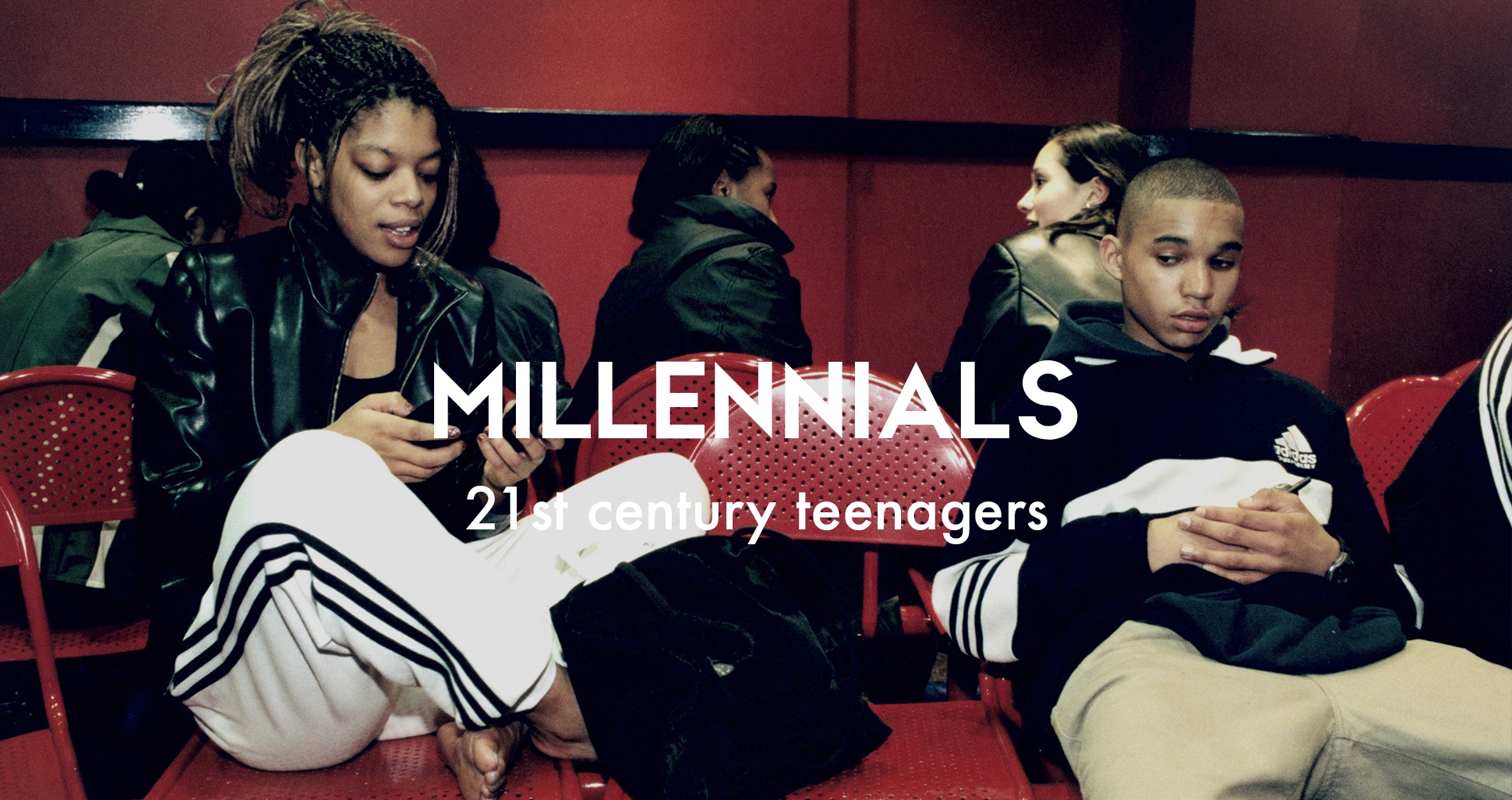 Throughout the late 1990s and early 2000s criticism and vilification  dominated the media and politicians' views of British youth culture. The climate was redolent of the late 1950s. This time, however, instead of the Teddy boy it was the 'Hoodie' (or 'Hoody') that became the focus for alarm about a perceived explosion in levels of youth crime.

'Hoodie' was originally a slang term for a hooded sweatshirt – attire popularised in the 1970s hip-hop scene and subsequently becoming a stock piece of streetstyle. But, from 2004, the term was increasingly used by the press as a pejorative nickname for what they presented as a new generation of violent youths plaguing British cities. The term gained particular currency after May 2005, when youngsters wearing hooded tops or baseball caps were banned from Kent’s Bluewater Shopping Centre as an attempt to combat crime. Subsequently, 'Hoodie' became media shorthand for a new delinquent menace. In March 2008, as part of its self-proclaimed campaign against 'feral gangs of hooded youths’, the Sunday Express even launched a crusade to 'Ban the Hood for Good' – the newspaper lobbying for 'hood-free zones' in British cities, so that youngsters would be banned from raising their jacket hoods in public.

The alarm peaked in responses to the riots that swept through Britain in August 2011. The events began in Tottenham, in north London, where protests about the police shooting of a local man, Mark Duggan, degenerated into a mass disturbance. Then, across the following week, thousands of people joined riots throughout many of Britain's major cities, including Birmingham, Leeds, Nottingham, Bristol, Liverpool and Manchester. Five people were killed and millions of pounds' worth of damage was done as vehicles, homes and shops were attacked, looted and torched; and order was only restored through the mass deployment of police. Subsequently, the causes of the riots were much debated. Many cited the role of factors such as economic deprivation, perceived social injustice, and frustration at the way communities were policed. But, at the time, David Cameron, the Conservative Prime Minister (elected in 2010), was unequivocal about what he saw as the root of the problem. The riots, Cameron, averred, were a product of 'gangs and gang culture', something that represented 'a major criminal disease that has infected streets and estates across our country'.

Cameron's rhetoric echoed an opinion that been bubbling through the media throughout the late 1990s and early 2000s. According to this perspective, British cities were facing a new plague of uniquely violent youth gangs. In 2007 concerns were spurred after an eleven-year-old boy, Rhys Jones, was killed in a shooting apparently linked to a feud between Liverpool gangs, and anxiety mounted about a new, violent gang culture. Throughout the 2000s the tabloids conjured with images of a 'Broken Britain' or a 'Wild West Britain', the fears about gang violence peaking amid a spate of fatal stabbings in British cities during 2018 and 2019.

Some commentators were convinced that violent youth gangs were a new menace proliferating through Britain's towns and cities. Others, however, were more circumspect. From this perspective, the term 'gang' could distort and sensationalise the problem by imputing a degree of structure and organisation to groups of kids that were, in reality, fairly loose affiliations of friends and local associates. Moreover, while the deaths were obviously shocking, the violence was hardly wholesale. Instead, it was concentrated in areas of Britain's most severe deprivation. In these terms, the real problem was not the rise of a new, unprecedentedly violent 'gang' culture, but the decline and disorganisation of inner-city neighbourhoods, and the degree of chaos in the lives of some of the young people living there. And, while the apparent spate of knife crime was deplorable, the fact that it took place in the context of a long-term decline in levels of youth crime and violence was often overlooked.

Echoes of earlier panics about youth culture also surfaced in the way sections of the  media made associations between knife crime and new trends in music and style. 'Murders and stabbings plaguing London and other cities are directly linked to an ultra-violent new form of music sweeping Britain', began a 2018 report in the Sunday Times, as Grime and then Drill music were blamed for 'gang-related' deaths.

Grime and Drill had their roots in the  jungle / drum 'n' bass scene of the late 1990s. First emerging in London in the early 2000s, Grime's stripped-down, jagged-edged sounds drew on elements of jungle and hip-hop, while its lyrics offered a gritty tableau of urban life. Beginning as an underground scene, Grime spread via pirate radio stations like Rinse FM before breaking through to more mainstream audiences with the success of artists such as Dizzee Rascal, Lethal Bizzle, Kano, Wiley and Stormzy. In a backlash against Grime's perceived commercialisation, however, new genres such as Road Rap and Drill quickly emerged.

Spinning-off from Grime in the late 2000s, Road Rap retained the references to gang life and violence that had featured in early Grime, but its musical style was closer to US Gangsta Rap. The music largely circulated through YouTube videos and mixtape releases, though rappers such as Sneakbo, Giggs and K Koke achieved a degree of commercial success. Drill music, meanwhile, originally developed during the 2010s in Chicago's South Side. Rappers such as Chief Keef and his cousin, Fredo Santana, exemplified Drill's characteristic sound − a slow tempo, matched with a deadpan delivery of dark lyrics that chronicled a life of hustling on the streets. The music found its counterpart in UK Drill, which emerged in and around Brixton during the mid-2010s and was largely distributed though the Internet, especially via YouTube platforms such as Link up TV, GRM Daily and Mixtape Madness. Like its US precursor, UK Drill was raw and angry, and offered a bleak view of inner-city life. Like early Grime, UK Drill was firmly rooted in local identities and neighbourhood affiliations, and multiple 'diss' tracks could be exchanged in fierce rivalries between groups from different areas.

According to some observers, Drill was responsible for a rising tide of urban crime. In 2018, for example, the Metropolitan Police argued that UK Drill played a significant part in London's rising number of knife attacks, and they urged YouTube to remove Drill content that, 'incites and glamourises' violence. But others were more astute. London's Mayor, Sadiq Khan, for example, more prudently argued that, 'The idea that a genre of music by itself is responsible for an increase in crime just doesn't bear up to proper scrutiny'. From this perspective, the causes of crime and violence had much deeper social and economic roots. Nevertheless − as had happened many times before −  the culture of young people made an easy scapegoat, and anxieties about the impact of Drill music persisted.

The reality confronting British youngsters in the early twenty-first century was very different to that which had faced their parents and grand-parents. The Baby Boom and the economic prosperity that had provided the bedrock for the Teenage Revolution were a distant memory. Instead, times seemed tougher and more unpredictable. Globally, young people were hard hit by the international financial crisis of 2007-8 and, across the world, levels of youth unemployment grew. Britain fared better than some countries. But, even here, young people faced a challenging economic future, marked by the burden of student loans and a proliferation of 'zero-hour' contracts in the new, 'digital economy'.

Nevertheless, some commentators were enthusiastic about what they saw as a new generation of prosperous and dynamic Millennials. The term 'Millennial' was coined in the US by the writers William Strauss and Neil Howe, who popularised the phrase in their book Millennials Rising: The Next Great Generation (2000). For Strauss and Howe, 'Millennials' were the cohort of youngsters born between 1982 and 2003, and the term passed into widespread usage as an epithet for those entering young adulthood during the early twenty-first century. As in America, 'Millennials' became a widely used term in Britain, where − like the term 'teenager' in the 1950s − it often connoted a sense of youthful energy, growth and forward-looking modernity. Once again, a new youth cohort was proclaimed as the vanguard of social and cultural change − only this time they were distinguished not only by their power as consumers, but also by what some observers saw as their pronounced 'media savviness' and embrace of digital technology.

This view of a rising generation of tech-talented Millennials was not without some foundation. The Internet and Smart phones had become the warp and weft of modern youth culture. At the same time, however, notions of a distinctly new, 'Millennial' generation could sometimes be unduly glib, glossing over the important social and economic differences that have always been central to the lives of British youngsters.

Digital technology has, nevertheless, clearly had a profound impact on the world of youth culture, music and style. In the 'connected' age of the Internet, the global 'reach' of local youth scenes has been both extended and accelerated. And developments like the spread of social media may also have increased young people's 'pick 'n' mix' attitude to music and fashion, with the rigidly defined scenes of the past giving way to a universe of hybrid 'style-fusions' as youngsters navigate their way through a dizzying plethora of taste options.

Yet scenes like mod, punk and rave remain an influential presence in British culture. Now, however, they are less the exclusive preserve of the young. Increasingly, many people maintain their enthusiasm for style and music well into middle-age and beyond. As a consequence, many scenes have become less 'age-specific' as many old rockers and ageing punks sustain their participation in scenes they first joined during their teens and twenties.

The early twenty-first century, moreover, has seen a blurring of the boundaries of 'youth culture' as distinctions between 'youth' and 'adulthood' became hazy. Changes in employment, education and family structure have lengthened 'youth' as a life-stage. Pathways to adulthood have become prolonged and more complex as educational careers are lengthened, entry into full-time employment is delayed, and the average age for marriage and the beginning of family life rises. As a consequence, 'youth' has become a much bigger part of many people's lives.

Youth culture, therefore, remains a significant cornerstone of national life − and Britain's 'youthquake'  is set to shake-up the country long into the future.