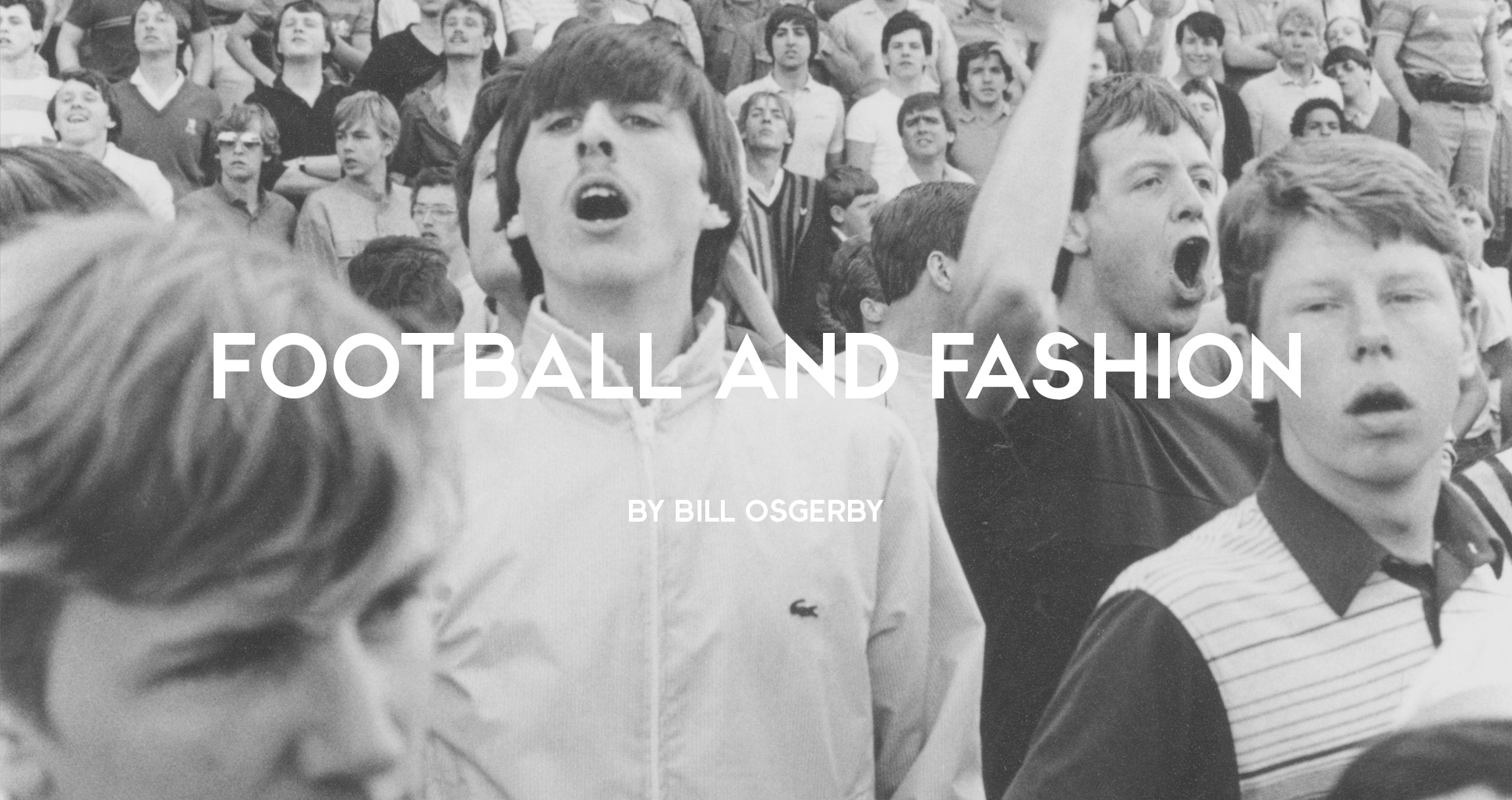 Football is everywhere these days, in high-end stadiums, on the telly and permeating every area of our culture. But this has been a major shift since the 70s and 80s, when football was mainly the preoccupation of working class Brits. It is in these days that teenage, fashion-forward football fans started filling the terraces - the Casuals. Delve into this youth tribe, from the fandom and fashions to the  violence. 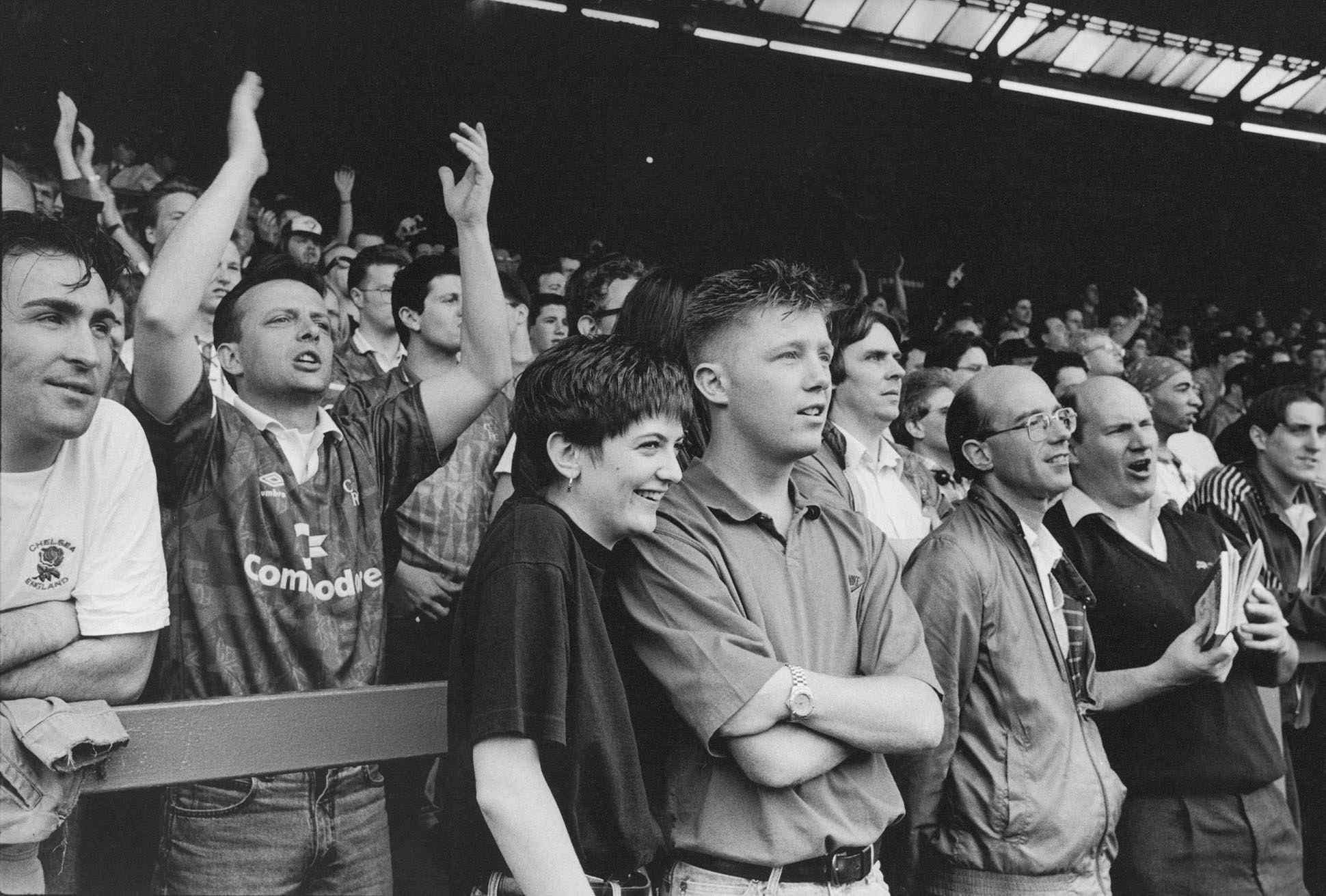 In 1985 the tabloid press drew attention to the appearance of the Cambridge ‘Main Firm’ − a group of Cambridge football supporters convicted of a violent attack on their Chelsea rivals. The Daily Mirror described the assailants as a ‘smartly dressed gang of thugs’ wearing ‘Pringle jumpers, denims and training shoes to make them look more like the boy next door than hooligans’. However, rather than being a cunning disguise as the Mirror intimated, the attire of the Cambridge Main Firm was indicative of the football-oriented ‘Casual’ style that had been crystallising in Britain’s working-class youth culture for several years. Observers noted a degree of regional variation in the Casual look, with corduroy flares making a comeback in Manchester, while Liverpool saw a vogue for baggy jumpers and sheepskin coats. There was also a dizzying turnover in fads and crazes. But, overall, the emphasis was towards a style that was smart and expensive, with a preference for Fred Perry sports shirts and Pringle golf jumpers increasingly giving way to an obsession with upmarket sportswear and high-class designer brands.

The Casuals, as they came to be known, evoked the sharp, competitive dress-sense of the 1960s mods. Some debate surrounds their origins, but there is general consensus that their roots lay in the British north-west during the late 1970s and early 1980s, where two parallel scenes paved the way for the Casuals’ development − the ‘Perry Boys’ in Manchester and Salford, and the ‘Scallies’ in Liverpool.

The Perry Boys − so-called because of their early proclivity for Fred Perry shirts − began to take shape in Manchester’s post-punk fallout of the late seventies and early eighties. Informed by the local Northern Soul heritage and the period’s mod revival, the ‘Perries’ affected a smart ‘soulboy-mod’ look. Alongside short-sleeved Fred Perry shirts, also de rigueur were Peter Werth long-sleeved, knitted polo shirts (often in burgundy or with thin hoops). Lee cords and Lois jeans were also much in evidence, together with Adidas sportswear − especially Adidas white, leather Stan Smith trainers. The haircut of choice tended to be a neatly combed ‘wedge’. Popularised by David Bowie on the cover of his 1977 Low album, the wedge had a long fringe, grown low in a ‘flick’ over one eye, with the sides shorter, layered and cut to a point at the back. Tastes in music were fairly eclectic, though soul and early synth-pop bands found some favour. Football was probably more important, and the Perry Boys competed on and off the terraces with their Merseyside rivals.

In Liverpool, the Perry Boys found their counterpart in the Scallies − a name derived from ‘scally’, local slang (abbreviated from ‘scallywag’) for a mischievous rascal. Scallies and Perries had some sartorial similarities but, by the end of the 1970s, the Liverpool lads were showing a distinct enthusiasm for European sportswear. During the late 1970s and early 1980s Liverpool FC enjoyed success in several European football competitions and their young fans, following the team across Europe, began returning home with expensive sportswear unavailable in Britain (some of it reputedly shoplifted from foreign stores). Items of Adidas and Lacoste clothing that were unavailable in the UK were especially prized, along with fashions from European labels previously little-known in Britain − for example, Sergio Tacchini, Fila, Ellesse and Kappa. Some inspiration was also taken from the Continental street fashions sported by groups such as the Italian Paninari − youngsters in Rome and Milan who coupled European sports brands with expensive American leisurewear.

""I was living in Battersea and you could hear the Chelsea crowd when a goal went in – so I started photographing the fans there. To take a camera along to a football game in the 70s was unusual. I’d get stopped by stewards and asked what I was doing. I had my Doc Martens boot laces taken off me, but never my camera." - John Ingledew, Football and Youth Culture Photographer 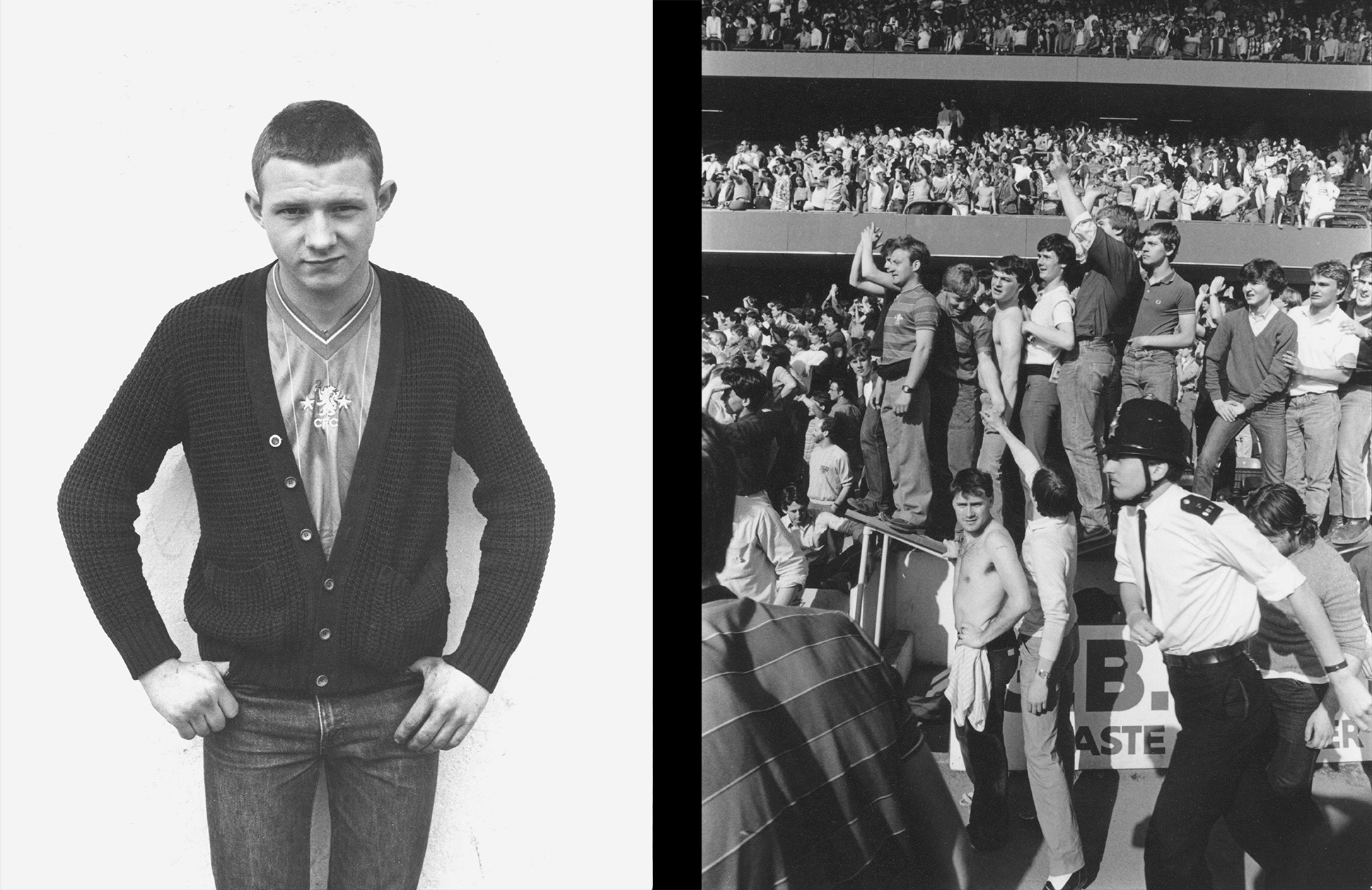 Back in Britain, the vogue for European sportswear and exclusive brands extended its influence during the early 1980s as young football fans travelled to ‘awayday’ matches around the country. What was increasingly dubbed the ‘Casual’ style, spread from the north-west to Leeds, Newcastle, the Midlands and London. And a competitive one-upmanship ensured terrace fashion trends saw a rapid turnover throughout the early and mid-1980s. In this respect, the Casuals represented the latest episode in the long history of style-consciousness among young British football fans. But the Casuals also maintained and extended another tradition of British soccer − hooliganism.

British football has a long association with violent partisanship. After 1945, however, disturbances at football games became specifically associated with younger sections of the crowd. By the 1966/67 season the national press were making regular reference to young ‘hooligan gangs’ operating at matches. And, throughout the late 1960s and early 1970s, skinhead gangs laid claim to football grounds, staking out the ‘home ends’ as their territory. During the 1970s an extensive network of violent rivalries developed between different teams’ supporters and tradition was sustained by the Casuals. Indeed, by 1985 most professional football clubs were followed by at least one gang or ‘firm’ of Casual hooligans − for example, Leeds United’s ‘Service Crew’, Millwall’s ‘Bushwackers’, Chelsea’s ‘Head-Hunters’, Portsmouth’s ‘6:57 Crew’ and West Ham United’s ‘Inter-City Firm’ or ‘ICF’ (the last two taking their names from the railway services they used for travel to away games).

The Casual football firms were a male domain. But Casual style found it’s equivalent among young, working-class women who shared the same taste for expensive sportswear and upmarket fashion brands. Showy gold jewellery was also common among both sexes, while young women’s hairstyles included the wedge (which had started life as a woman’s cut), permanent waves and big perms, along with early sightings of the ‘Essex facelift’ (which sees the hair pulled back severely and tied in a bun or ponytail at the back ).

In the Casual scene music was less important than football. And, as with the Perry Boys, musical tastes could be varied. In Liverpool, however, The Farm became associated with the Casual’s visual style, while the band’s front-man − Peter Hooton − co-founded The End, a local football fanzine that chronicled the vagaries of Casual fashion. Shades of Casual style and attitude also surfaced among the Stone Roses, Happy Mondays and other bands associated with the ‘Madchester’ music scene that developed during the late 1980s and early 1990s.

The violent attacks and bitter cycles of retribution between the ‘top boys’ of Britain’s Casual football firms punctuated the early 1980s. The violence was also taken abroad. It culminated in 1985 at the European Cup Final held at the Heysel Stadium in Brussels, where thirty-nine people died and hundreds were injured in the panic that ensued as a phalanx of Liverpool fans charged at their Juventus rivals. In the wake of the tragedy, a series of police operations and high profile prosecutions set about breaking-up British football’s hooligan firms.

By 1988 the Casuals’ heyday was fading. The decline, however, was less the result of police intervention than of shifts in the style and substance of youth culture that saw the football Casuals increasingly drawn into the rave and dance music scenes that proliferated during the late 1980s and early 1990s. Casuals had often been associated with petty crimes such as ticket-touting and drug-dealing, and involvement in this underground economy ensured they were in the vanguard of the ‘Acid House’ scene that exploded during the late 1980s. Increasingly, football violence seemed to offer less of a buzz than weekend raves, and Tacchini and Ellesse were steadily swapped for house beats and ecstasy.

Since then, however, Casual style has undergone a resurgence. From the mid-1990s, British football grounds saw the rise of a new, Casual-esque fashion-consciousness, with a fresh enthusiasm for brands such as Stone Island and Aquascutum existing alongside a love of classic favourites like Adidas and Lacoste. 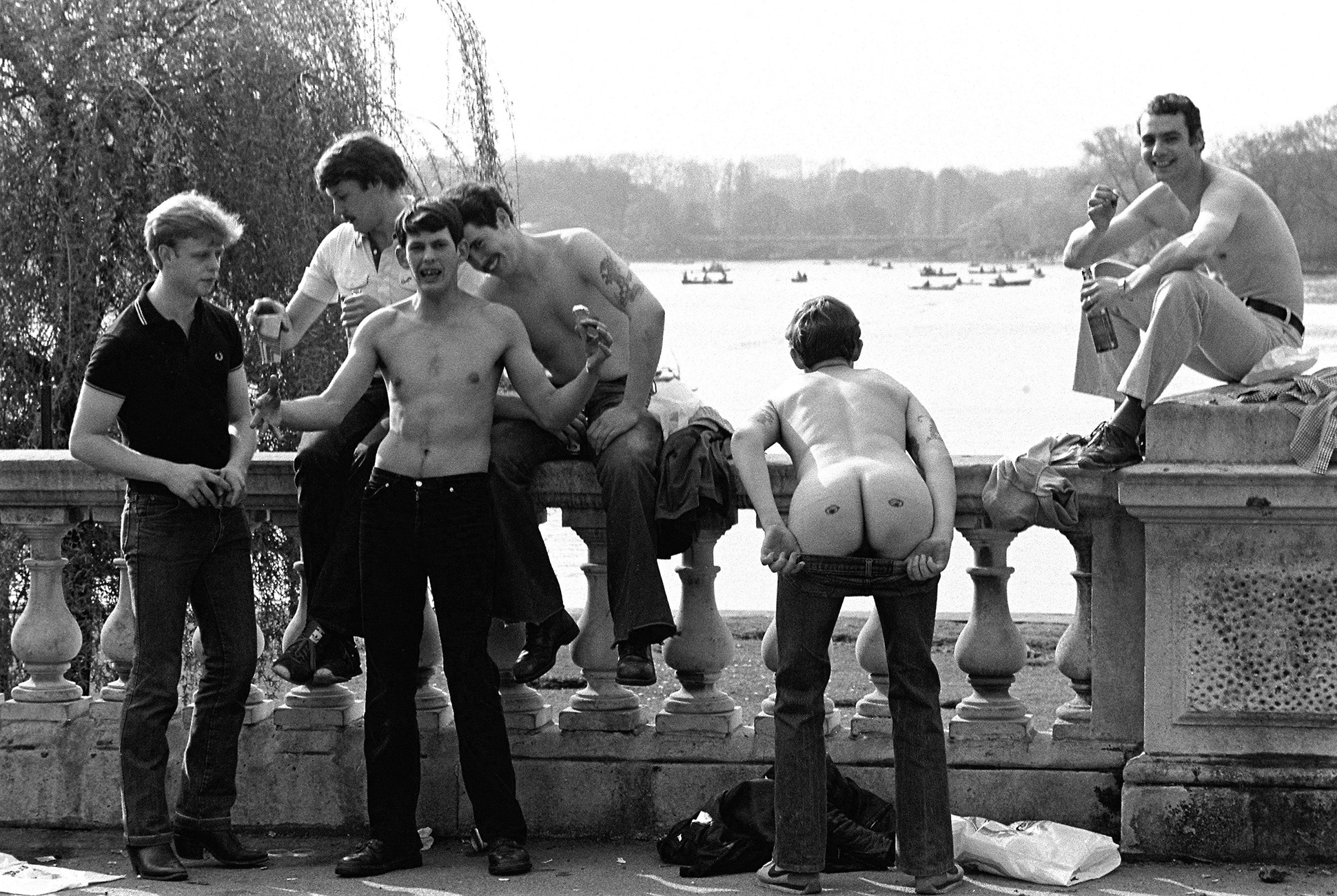