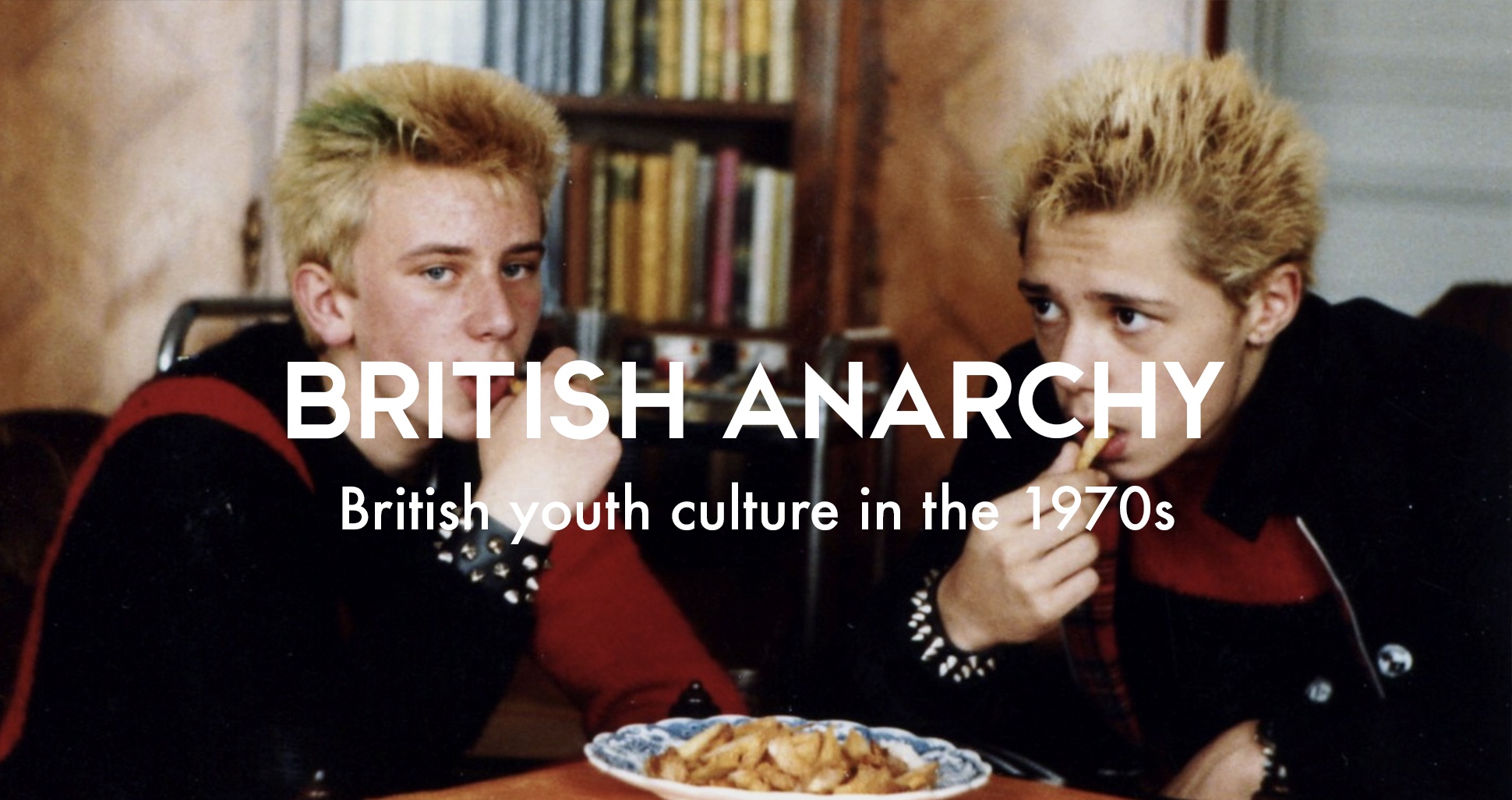 Alongside the burgeoning hippy scene, the late 1960s also saw the emergence of the defiantly proletarian skinheads. The skinheads' stylised recreation of 'traditional' working-class machismo first took shape in the mid-1960s as a harder-edged version of mod style. And, by the late 1960s, the skinhead image had coalesced into the distinctive 'uniform' of steel toe-capped work boots, rolled-up jeans, braces and closely cropped hair. The skinheads had a pronounced reputation for violence, and were particularly associated with a surge in football-related bloodshed. Attending games en masse, groups of skinheads staked out the football terraces as their own, and a network of violent feuds developed between rival football 'ends'.

The skinheads also had a reputation for bigotry, and became notorious for a wave of vicious, racist attacks. At the same time, however, the skinheads also had a close affinity with black youth style − a connection which exemplified the way intersections between black and white scenes have regularly been a key feature of modern British youth culture.

Illustrative was the way mods of the early 1960s had enthused over the sounds of black, American soul music and rhythm and blues (the latter emulated by 'mod' groups like The Who and The Small Faces). Jamaican ska and bluebeat were also mod favourites, a taste that continued into the skinhead years. Ska luminaries like Desmond Dekker and Prince Buster were especially popular, while record companies such as Trojan and Pama sprang up to meet the growing demand for Jamaican music. Other elements of black style were also appropriated by white kids. A particular inspiration were Jamaican 'rude boys' – the hustlers of downtown Kingston – whose street-sharp image of two-tone 'tonic' suits and 'pork pie' hats found echoes in both mod and skinhead fashion.

Dynamism has been a constant feature of British youth culture, and the skinhead 'look' quickly mutated. By the end of the 1960s a more sublime variation on the skinhead theme had emerged in the 'suedehead', who coupled a less severe crew-cut with a more fastidious fashion sense (including a penchant for city gents' Crombie overcoats). And the suedehead image, itself, quickly shifted into the 'Smoothie' styles of long hair, flared trousers and sleeveless 'tank-top' pullovers that became a hallmark of British youth fashion during the early 1970s.

The same period also saw mod narcissism amplified in the glam rock cult. Flamboyant glam rockers such as Slade, The Sweet and Gary Glitter were resplendent in silver jumpsuits and improbably high platform-heels. Despite their make-up and camp antics, however, most glam performers were rooted in robustly heterosexual models of masculinity. Dubbed 'brickies in mascara' by critics, they drew on androgynous imagery largely for its shock value. But some – most notably David Bowie – used their 'glam' personae to explore a variety of gendered and sexualised identities, and this emphasis on the 'fluidity' of gender and sexuality became a more pronounced feature of youth culture over subsequent decades.

The 1970s also saw changes in black youth style. Influenced by developments in Jamaica, the quick tempo of ska was steadily replaced by the throbbing bass of reggae. And Jamaican artists such as Bob Marley were soon joined by British reggae bands − for example, Aswad, Black Slate, Matumbi and Steel Pulse. Sound systems also appeared. Developing originally in the Caribbean, sound systems were mobile discotheques, known for their charismatic DJs and enormous speaker systems, and had become an essential feature of West Indian clubs and shebeens. Britain's own sound systems began to appear in the early 1960s. One of the first was set up by Duke Vin in London’s Ladbroke Grove, followed later by Count Shelly in Dalston, and Sir Coxsone and Jah Shaka in Brixton.

The iconography and beliefs of Rastafarianism also emerged as a key influence. In Britain, Rasta style became popular among many youngsters, some adopting dreadlocks, reggae and Ethiopian colours as a symbolic form of opposition to a society in which they felt alienated and disaffected. At the 1976 Notting Hill Carnival the anger of many black-British youths finally boiled over, and their frustrations turned against the police in a series of running street battles.

The violence was indicative of a wider climate of confrontation that characterised Britain during the late 1970s. Rising unemployment, urban disorder and fraught industrial relations all contributed to a sense of spiralling conflict. An economic downturn saw Britain slide into recession, and the labour markets that had buoyed-up youth employment and earnings during the 1950s and 1960s contracted. As a result, the scale of youth unemployment mounted. By the mid-1980s the number of jobless aged between 16 and 24 had reached 727,000 – nearly a third of Britain's unemployment total – and young people were being increasingly channelled into low-paid or part-time jobs, or displaced into a proliferation of (sometimes futile) government training schemes.

On 1970s dance-floors, however, there was still a goodtime vibe. Events in London have often grabbed attention but, beyond the capital, important regional scenes have also developed, and Northern Soul stands as a good example. A spin-off from the earlier mods, Northern Soul was a dance scene that originally emerged in the North West and Midlands during the late 1960s. A surge in popularity during the 1970s saw Northern Soul fans flock to clubs like the Twisted Wheel in Manchester and the Casino in Wigan, where devotees devised unbelievably athletic dance routines to the most obscure American soul sounds. More widely, the pulsating rhythms of disco were also transplanted from their origins in the black and gay clubs of New York to mainstream British nightlife. Threadbare dancehalls were refitted as glitzy discothèques as the late 1970s spawned a huge disco boom.

Elsewhere, the development of punk rock seemed to dramatise Britain's wider sense of crisis. Punk first burst into the public consciousness in 1976 when the Sex Pistols – then a little-known rock band – were booked to promote their first single, 'Anarchy in the UK', on a live TV chat show. Baited by the programme’s host, the band sneered, swore and made themselves as disruptive as possible. Uproar followed, and the media lambasted the new punks in one of the most intense panics about youth culture since the 1960s.

Punk bands like the Sex Pistols, the Clash and the Damned drew on a variety of musical influences. From Britain inspiration came from both the glam theatrics of David Bowie and the coarse rhythm 'n' blues of London's 'pub rock' scene. American influences were also important, particularly from the 1970s New York club scene dominated by bands such as Television and the Ramones. Punk style, meanwhile was plundered from the a variety of sartorial vaults. Leather jackets, drainpipe trousers, and work-boots all found a place in a ripped and torn collage held together by safety-pins and zip-fasteners. Hair was short, spiky and sometimes dyed. Slogans were stencilled onto clothes and the iconography of sexual fetishism (studded leather, PVC, bondage straps, stiletto heels) combined in a style that radiated alienation and transgression.

Initially, some commentators took punk's 'guttersnipe' stance at face value, interpreting it as 'dole queue rock', the angry voice of youngsters from decaying inner-cities. Closer attention, however, revealed the important influence of an art school avant-garde.  Indeed, many of those who frequented early punk clubs like London's Roxy and Vortex were art students and middle-class youngsters from surburbia. Moreover, while punk’s iconoclasm scorned the 1960s counterculture, many figures behind the punk scene had dabbled in earlier bohemian and radical art movements – for example, Bernie Rhodes (manager of the Clash), Jamie Reid (the Sex Pistols' graphic designer) and, especially, Malcolm McLaren (the Pistols' Fagin-esque mentor).

The punk scene had its share of chauvinists, but one of punk's most compelling facets was the way it provided a fertile space for challenging conservative notions of gender and sexuality. Strident punk artists like the Slits and Siouxsie Sioux, for example, delivered an avowedly rebellious version of femininity in their forthright songs, unconventional clothing styles and assertive stage performances. This, however, was hardly the first time women had played a key part in Britain's parade of youth styles. Young women were always prominent in postwar youth movements; especially in the mod scene, where the crowds of sharply-attired young women sometimes outnumbered the men. Women were also a significant part of the 1960s counterculture, an involvement that laid the way for the development of the modern Women's Movement − heralded by Britain's first National Women's Liberation Conference, held in Oxford in 1970.

An important role was also played by Beatlemania and fandom for 1970s 'teeny-bop' bands such as the Osmonds and the Bay City Rollers, along with the legion of boy bands that followed. For many young women (and young men), pop fandom offered important opportunities for friendship and communal solidarity − and even provided avenues for an intoxicating taste of collective power.