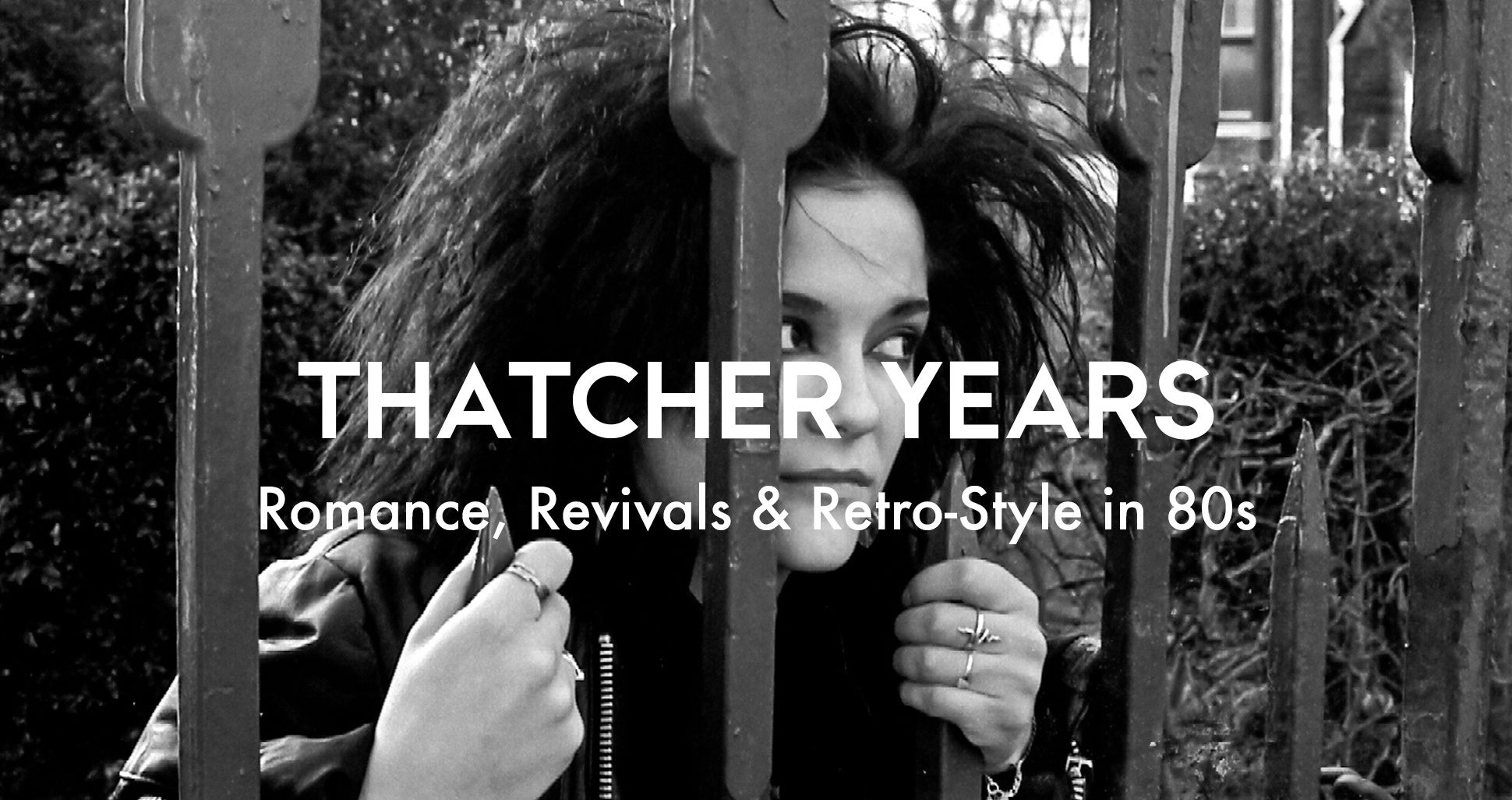 Like all youth styles, punk was a continually developing fusion of different factions. And, during the early 1980s, its diversity became apparent as punk fragmented into a variety of contingents. Punk’s more narcissist elements regrouped at London clubs such as Blitz where the 'New Romantics', as they were dubbed, turned their backs on punk's plebeian image and instead championed decadent fantasy, with  a taste for frilly-fronted fencing shirts, braided tunics and pantomime-dame chic. Meanwhile, the darker, post-punk sounds of Siouxsie and the Banshees, the Cure and Bauhaus laid the way for the gloom-fixated, period-styled 'goth' scene − its rise marked by the success of bands such as the Mission, the Sisters of Mercy and Alien Sex Fiend. Other, more overtly politicised, elements of punk developed into an 'anarcho-punk' scene, that saw groups like Crass (who were part art collective, and part punk rock band) deploy a self-consciously 'DIY' aesthetic in their promotion of anarchism, feminism, animal rights and direct-action protest.

A DIY approach also figured in a proliferation of independent record labels. The punk explosion had encompassed a legion of new independent labels and the more enduring of these − for example, Stiff Records and Rough Trade − were joined by a fresh wave of independents in the early 1980s. Several of the new-comers stood out as especially influential. In Manchester, Factory Records was originally launched in 1978 by Tony Wilson and Alan Erasmus, and during the 1980s it became the basis for an innovative post-punk scene spearheaded by Joy Division and, subsequently, New Order. In Glasgow, meanwhile, Alan Horne founded Postcard Records in 1980, achieving critical acclaim with a roster of local acts that included Orange Juice and Aztec Camera. Equally distinctive was 4AD, established in early 1980 by Ivo Watts-Russell and Peter Kent, the label coming to prominence with post-punk bands such as The Birthday Party and the Cocteau Twins. Creation Records was another success. Launched by Alan McGee in 1983, Creation first came to the fore in 1984 with the Jesus and Mary Chain, and the label enjoyed success throughout the 1980s with bands such as the Boo Radleys and Primal Scream.

Independent record labels were often known simply as 'Indies' − but the term 'Indie' also became synonymous with wave of jangling but introspective guitar bands. The Indie scene was galvanized by the release of C-86, a compilation cassette of leading Indie bands that was given away free with an edition of New Musical Express, and during the mid-1980s Indie bands sprung up around the country. The Soup Dragons, for instance, hailed from Glasgow, while the Popguns came from Brighton and Talulah Gosh sprang from Oxford. Manchester, of course, also figured prominently − and local heroes The Smiths represented, for many, the leading post-punk Indie band of the mid-1980s.

Indie music was also associated with a distinctive 'look'. Dubbed the 'shambling' or 'shoe-gazing' scene by music journalists, Indie style was characterised by an almost quaint, 'jumble-sale' aesthetic. For girls this meant a vogue for floral or polka-dot frocks, along with white ankle socks and plimsolls. For boys it meant washed-out cardigans and pullovers; and short, tousled or pudding-basin haircuts. There was also an abundance of plain anoraks for everyone, in an affectation of pre-pubescent androgyny.

The post-punk fallout also spawned a collection of 'retro' styles, including a mod revival and a resurgence of ska. The ska revival was initially focused around Coventry bands such as the Specials, the Selecter and others signed to Jerry Dammers' Two-Tone record label, but the new ska scene quickly became a national phenomenon.

Rock 'n' roll sounds were also revived. Fused together with elements of punk, the result was a distinctive Psychobilly scene. Bands like The Meteors and Guana Batz were in the vanguard, while the  Klub Foot nightclub − opened in 1982 at the Clarendon Hotel in London's Hammersmith − became Psychobilly's epicentre.

During the late 1970s the skinhead style also reappeared. More raw than the 1960s original, the new version combined the skinhead image with the ferocity of punk. The style was associated with a music subgenre known as 'Oi' (after the choral refrain common to its songs), and Oi bands such as the Cockney Rejects and the 4-Skins took punk's brash minimalism to further extremes. The skinhead revival had a reputation for racism. In some instances this was unfair, but many skinheads were voluble supporters of fascist groups such as the National Front and the British Movement. In response, the late 1970s saw the formation of Rock Against Racism (in 1976) and the Anti-Nazi League (1977), organisations that had some success in mobilising British youth behind a popular anti-racist movement.

The 1980s also brought a reinvigoration of the British heavy metal scene. During the late 1960s Britain had been a cradle for the first generation of heavy metal − originally known as 'heavy rock' − with bands like Black Sabbath, Deep Purple and Led Zeppelin enjoying global success. During punk's heyday, the music had become less fashionable, but by the beginning of the 1980s a revival was underway. In 1979 journalist Geoff Barton, working for the music paper Sounds, coined the term 'New Wave of British Heavy Metal' (or 'NWOBHM') to denote the resurgence, as new heavy metal bands sprang up throughout the country. Some were short-lived, but bands like Sheffield's Def Leppard and East London's Iron Maiden have been more enduring. The fans were dubbed 'metalheads' or (more commonly) 'headbangers' − from the way they shook their heads rhythmically to the speeding guitars − and they were invariably recognised by their long hair, grubby jeans, black or white T-shirts adorned with band logos and denim jackets festooned with band patches.

The revivals and retro-styles of the 1980s were influenced by the youth scenes of yesteryear, but they always represented more than misty-eyed nostalgia. Rather than being straightforward, indiscriminate imitations of the past, the retro scenes were selective and firmly rooted in the present. They always put a contemporary spin on the established styles, revising and reconfiguring the 'original' image, and producing something distinctively new by making innovative touches and adding fresh ingredients.

For some young people the 1980s were a prosperous decade. Throughout the decade, a fortunate few enjoyed the high-rolling prosperity offered by a massive expansion of the business and financial sectors. Rather than the 'swinging teenager', however, it was the image of the young, urban professional – or 'yuppy' – who embodied the mood of 1980s 'good times'. Ambitious and acquisitive, the archetypal yuppy personified the free market ideals that prevailed during the political ascendancy of Margaret Thatcher and the New Right.

But, at the other end of the social scale, levels of unemployment and inner-city deprivation soared. Black-British youngsters were hit especially hard, and their feelings of resentment were intensified by practices of policing that many judged heavy-handed and racist. During the early 1980s the anger detonated in some of the worst urban disorders in British history. In 1981 riots in south London's Brixton and Liverpool's Toxteth saw both black and white youths involved in fierce fighting, looting and widespread destruction. Further riots exploded in the mid-1980s, the most serious at Tottenham’s Broadwater Farm housing estate where, in 1985, two hundred police officers were injured and one was killed. Problems also surfaced in the provinces. Once models of state housing provision, many of these areas had declined into desolate sites of long-term poverty and the early 1990s saw a spate of violent disorders erupt in the rundown housing estates of Cardiff, Oxford and Tyneside.

Other youth groups deliberately shunned 1980s materialism. The 1970s had seen the counterculture slide into decline, though elements survived in a circuit of summer fairs and festivals. For some, the journeys between events extended into a year-round nomadic lifestyle and by the beginning of the 1980s what became known as the 'Peace Convoy' had taken shape as columns of tatty vans, lorries, buses and caravans shambled from festival to festival. Alongside the convoy and festival scene, a distinct cultural group also coalesced. Known as 'New Age Travellers', they were denoted by a 'crusty' style that jumbled together punk and hippy aesthetics in a mélange of baggy army fatigues, oversize combat boots, matted or dreadlocked hair and a profusion of body piercings.

Numbers of New Age Travellers were also involved in protests against road construction projects and the stationing of American nuclear weapons at British air bases. The combination of their unorthodox lifestyle and political activism won the travellers vilification in the popular media and condemnation from the authorities. As a consequence, police operations against free festivals and the Peace Convoy escalated, reaching a violent peak in 1985 when (in what was later dubbed the 'Battle of the Beanfield') a traveller convoy was attacked by riot police with appalling ferocity.

Official opprobrium also found other targets. As in earlier decades, anxieties about the general trajectory of cultural change were projected onto youth, and young people were configured as the harbingers of national breakdown. In 1988 the anxieties found specific focus around a spate of drunken disturbances in provincial towns. The finger of blame was pointed at a 'new' generation of affluent but undisciplined youth, and politicians such as Douglas Hurd (the Home Secretary) coined the term 'lager lout' to describe young people who, he argued, had 'too much money in their pockets [and] too many pints inside them'. Originally coined in 1987 by TV comedian Harry Enfield, the phrase 'loadsamoney' passed into public debate, and was used by both politicians and the media to denote what they saw as a gaudy affluence that promoted belligerence and boorishness among the young.

There was certainly an aura of affluence around some youth styles of the time. First emerging among football fans in Manchester and Liverpool, a new 'Casual' look harked back to the upmarket, competitive dress-sense of the Teddy boys and mods. Alongside their enthusiasm for expensive sportswear and designer labels, the Casuals were also associated with a new phase in British football violence. Hooligan gangs such as West Ham's 'Inter-City Firm' and Chelsea's 'Head-hunters' seemed more organised than their predecessors, exuding business-like efficiency in the way they evaded police surveillance and launched meticulously planned attacks on rival 'firms'.