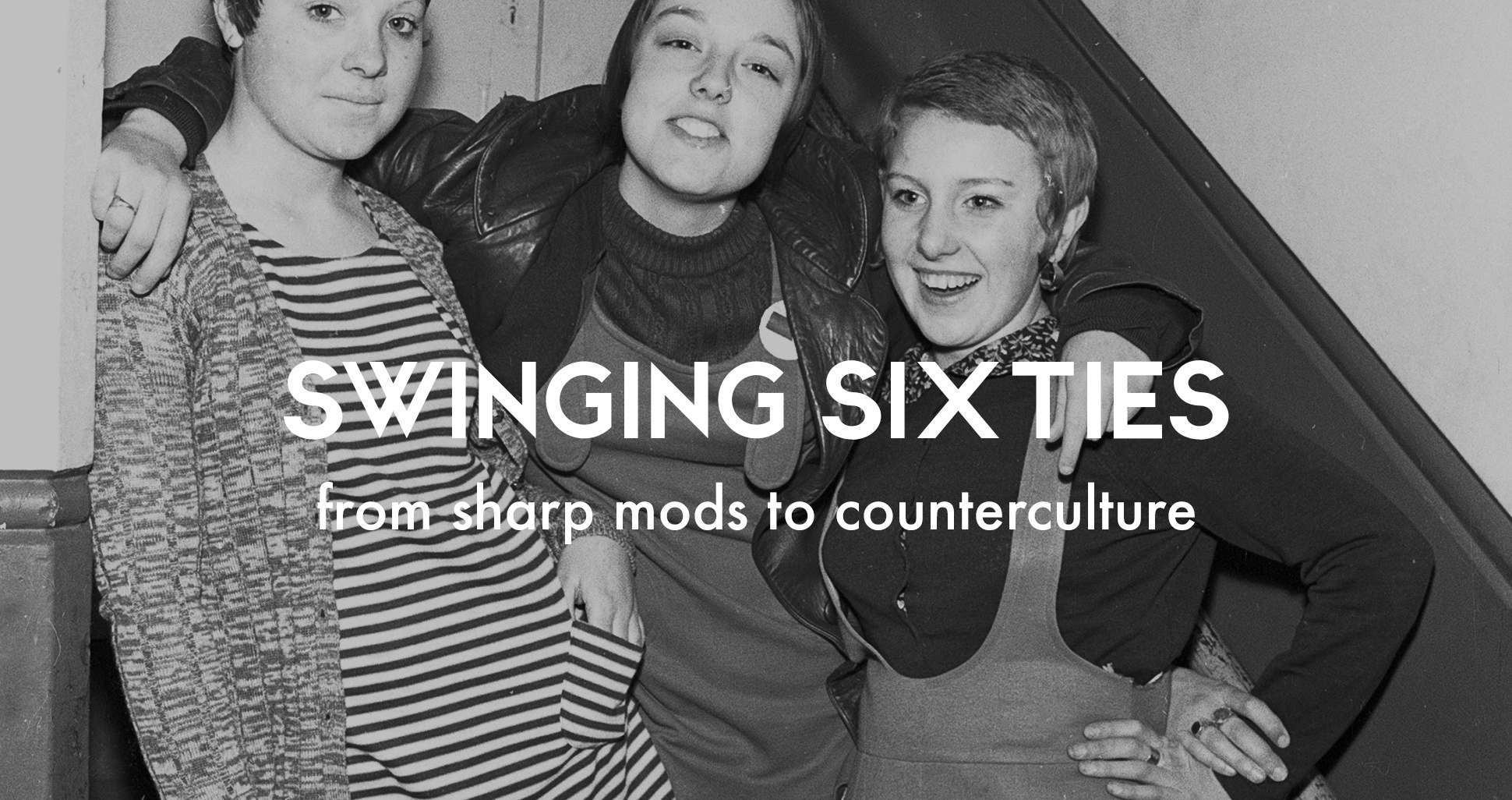 By the 1960s the Teddy boy’s drape jacket had been displaced by the sharp, Italian-inspired styles associated with the new modernists or, as they were later known,  mods. Media portrayals of the mods, however, often reproduced the fearful, overwrought treatment given to the Teddy boys. Like the Teds before them, the rise of the mods was often presented as a national blight. The attitude peaked in responses to the 'battles' between mods and rockers (the mods' leather-jacketed, motorcycle-riding rivals) at British seaside resorts in 1964. The amount of violence that took place was relatively small-scale, but the disturbances were sensationalised by the press and presented as moments of wholesale havoc.

Even amid such fraught episodes, however, popular fascination with youth culture was never far away. In 1964, for example, at the height of concerns about 'marauding' mods and rockers, the Sunday Times Magazine (then an arbiter of 'with it' fashion trends) featured a sumptuous, eight-page photospread spotlighting the mods' sartorial flair.

Politicians also capitalised on the vibrant aura of 1960s youth. Harold Wilson was especially adept. In 1964 the Labour Party leader jumped at the opportunity to present the Beatles with Variety Club awards (the Fab Four, with their characteristic humour, greeting Wilson as 'Mr. Dobson'). And, as Prime Minister in 1965, Wilson played a more illustrious gambit, investing the Beatles as Members of the Order of the British Empire (MBEs). A deliberate appropriation of the imagery of youth, the award exemplified Wilson’s attempt to promote a vision of a 'New Britain' characterised by forward-looking, youthful vigour.

The pulsating nightclubs and fashionable boutiques of 'Swinging London' also fed into notions of Britain entering an age of bold, liberated modernity. It was a theme that caught on noticeably abroad. In the USA, especially, British cultural exports such as Beatlemania, mod style and Mary Quant's chic fashion designs accrued an aura of exciting vitality. Indeed, it was Diana Vreeland − the American editor of Vogue magazine − who originally coined the term 'youthquake' in 1965 to describe the way British youth culture was changing the world of fashion and music. And the sense of Britain as the font of youthful dynamism was enshrined in Time magazine's 1966 cover story on 'London: The Swinging City'. 'Youth is the word and the deed in London', Time enthused, 'seized by change, liberated by affluence ... everything new, uninhibited and kinky is blooming at the top of London life'.

The trans-Atlantic trade in youth culture continued during the late 1960s. In Britain, the US counterculture exerted particular influence. Always a loose coalition of bohemian strands and political factions, the 1960s counterculture grew from earlier artistic and political movements. On both sides of the Atlantic, the 1950s 'Beat Generation' had fused existentialist philosophy with jazz, poetry, literature, eastern mysticism and drugs – themes that were all sustained in the 1960s. And, in Britain, the Campaign for Nuclear Disarmament (CND, formed in 1958) had also won many young supporters, and its direct-action campaigning helped pioneer forms of protest that became a feature of later radical groups.

During the late 1960s the spiritual home of the counterculture was Haight-Ashbury, a once genteel neighbourhood of San Francisco that was colonised by a motley assortment of hippies, rock bands and student militants. But Britain also hit a psychedelic groove. By 1966 venues such as the Roundhouse in Chalk Farm and UFO (Unlimited Freak Out) in Tottenham Court Road were focal points to a burgeoning London underground. New rock bands such as Pink Floyd (regulars at UFO) sought to push back the frontiers of musical creativity, while festivals, concerts and assorted 'happenings' helped generate a sense of collective identity and 'alternative' lifestyle. The Isle of Wight Festival, first held in 1968, was a particular success, while the Glastonbury Festival, inaugurated in 1970, went on to become a national institution.

The underground press were also important. Publications such as International Times (or simply It, launched in 1966) and Oz (launched in 1967) took the lead, exploring the aesthetics of dissent through their surreal cartoons and fantastic visuals. The same creative strategies featured in the counterculture's posters, films and the various experimental projects of the Arts Lab movement. Nonconformity and exoticism also became bywords in hippy style, and hip boutiques abounded with bell-bottomed trousers, kaftans and a potpourri of faded denim and tie-dye. Selfexploration was also a countercultural preoccupation, with a quest for inspiring 'journeys' through both geography and consciousness. Many intrepid hairies hit the 'hippy trail' to India (and other 'exotic' locales) in search of spiritual karma, while trips of another kind were undertaken through the use of hallucinogenic drugs – in particular, Lysergic Acid Diethylamide (generally known as LSD or 'Acid').

Unlike the primarily working-class Teddy boys and mods, the 1960s counterculture had a bigger middle-class constituency. Partly, this was indebted to the growth of universities. In 1963 the government's influential Robbins Report on higher education had urged a major expansion of higher education, and subsequent years saw not only

the expansion of existing colleges, polytechnics and universities, but also the establishment of a host of new, 'red brick' universities − four in Scotland (Dundee, HeriotWatt, Stirling and Strathclyde), and seven in England (East Anglia, Essex, Kent, Lancaster, Sussex, Warwick and York). As a consequence, the total population of students in fulltime education doubled between 1963 and 1971, reaching a figure of 457,000. The Robbins Report had envisaged the growth would provide greater educational opportunities for working-class youngsters. And, certainly, more working-class kids began going to university. But, in absolute terms, it was the middle-class that benefitted most, and the 1960s saw far greater numbers of middle-class youngsters proceed to three years (or more) in higher education.

Compared to working youngsters, students possessed a relatively low level of disposable income. University life, however, had its compensations. For example, it offered significant amounts of leisure time, together with the independence of living away from the parental home. Many of the new universities also had a decidedly liberal ambience, as a fresh generation of young academics took a less formal approach to teaching and introduced many new, radical ideas to the syllabi.

Nevertheless, while middle-class students made up a big part of the 1960s counterculture, it was never a homogeneous movement. The counterculture was always a network of loosely affiliated causes, while its membership was fairly disparate and drawn from a variety of class backgrounds. Equally diverse were the responses the counterculture elicited from the state and the media.

The more explicitly radical strands of the counterculture often faced repression. Political activism in Britain was not on the scale of 'Les Événements' that rocked Paris in May 1968, nor of the intensity of opposition to the Vietnam War in America. But there were still significant moments of dissent. Fierce confrontations, for example,  occurred between student groups and the administrations of many academic institutions – especially the London School of Economics and Hornsey College of Art. Opposition to the Vietnam War, meanwhile, superseded CND as a cause for protest, and in 1967 and 1968 massive demonstrations were held outside the US Embassy. Aggressive policing ensued, and violence flared between protestors and police 'snatch squads'. Further clashes came in 1974, with a demonstrator killed as police broke up a rally against the extreme right-wing National Front in London's Red Lion Square.

Other elements of the counterculture also faced resolute police action. The late 1960s saw drug laws enforced more vigorously, while police raids on clubs such as UFO led to their closure. The offices of underground publications such as It were also raided and in 1970 Oz editors Richard Neville, Jim Anderson and Felix Dennis were prosecuted – and subsequently imprisoned – for obscenity.

In contrast, the counterculture's aesthetics and lifestyles often elicited sympathy, even a degree of admiration. This was especially apparent in reactions to the Rolling Stones' drugs trial of 1967. Amid a blaze of publicity, Keith Richards and Mick Jagger were convicted and sentenced to three months' imprisonment for the possession of illegal drugs (though both walked free after an appeal). Rather than denouncing the Stones, however, significant sections of the media rallied to their defence. Famously, The Times published an editorial asking 'Who Breaks a Butterfly on a Wheel?' – the newspaper defending Jagger and Richards and attacking their sentences as unacceptably draconian.

The media were also fascinated by the counterculture's hedonistic lifestyles. In 1968, for instance, in a feature series spotlighting 'The Restless Generation', The Times praised hippy communes such as the Tribe of the Sacred Mushroom for generating 'a fresh approach to living' that provided its members with 'livelihood and fulfilment'.

Rather than being universally reviled, then, the 1960s counterculture was often a source of popular fascination. Indeed, the counterculture's libertine ethos of self-expression and 'doing your own thing' proved widely attractive at a time when Britain's lifestyles and cultural values were rapidly changing. And, as traditional ideals of restraint and respectability gave way to a greater emphasis on hedonism and personal consumption, the fashions, hairstyles, music and attitudes of the counterculture all percolated into the social mainstream.