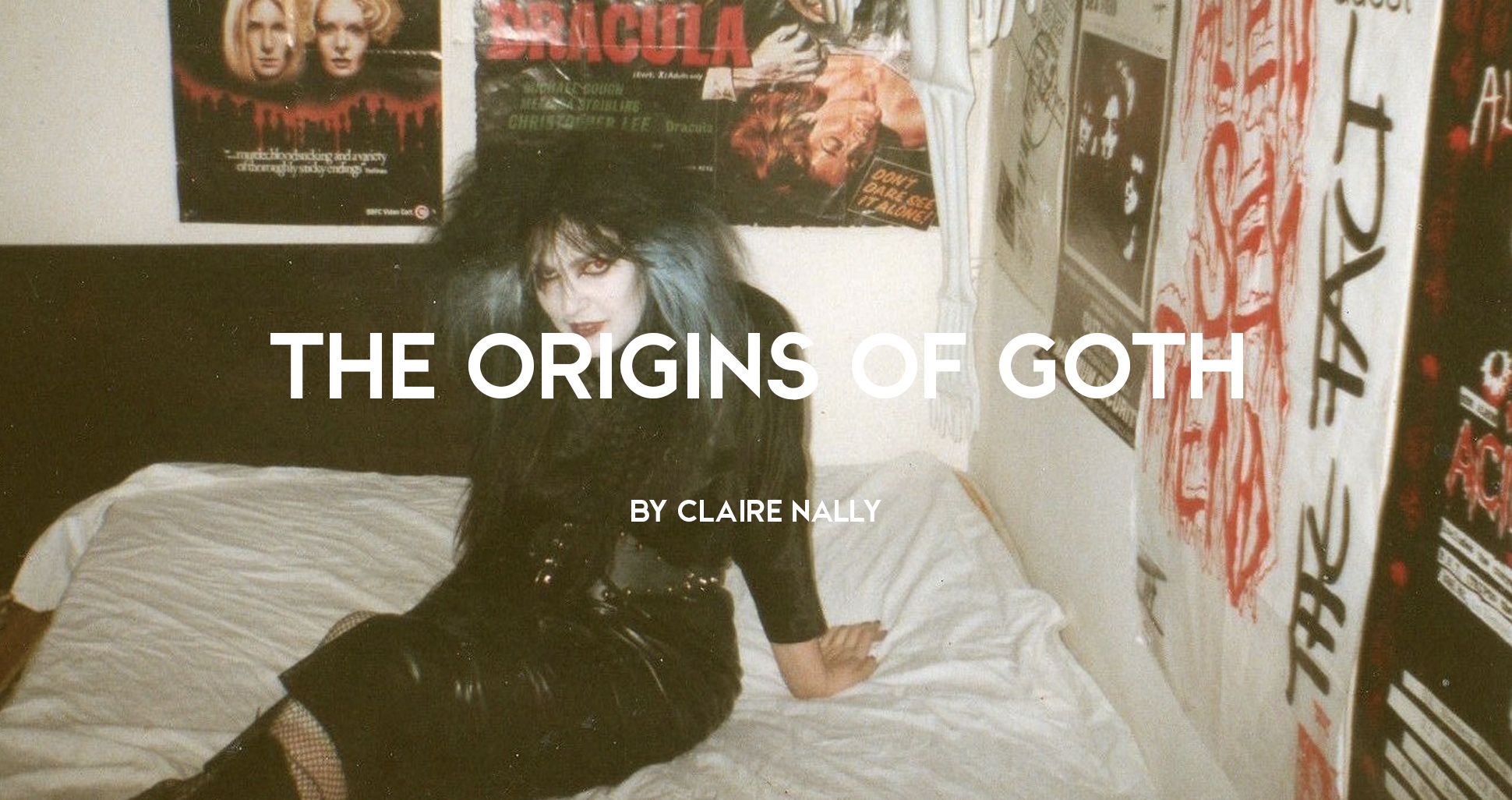 One of the most enduring youth culture tribes, the Goth scene as developed since the 80s, spawning a multitude of subgenres, fashions and sounds. Capturing our imagination as the darkest of subcultures, the Goth scene developed in the late 70s through venues such as the Batcave. In this exhibit we will be looking at the Goth movement, its emergence and enduring legacy. 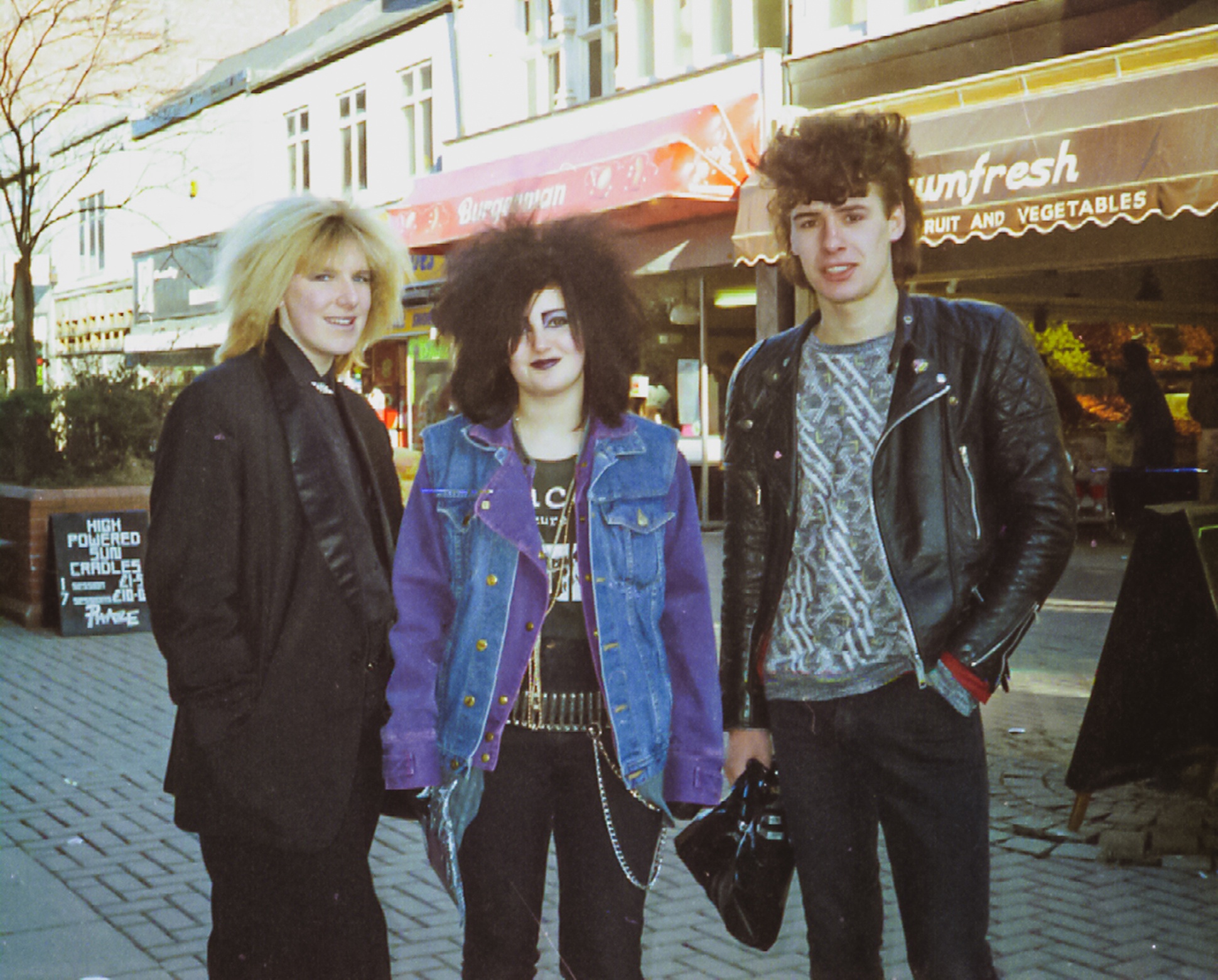 Goth is a music category, a fashion style, a lifestyle, and is often characterised by an affiliation to a ‘dark’ aesthetic. Goth developed from various other youth subcultures, including punk, and evolved from these underground origins in the late 1970s to a more commercial visibility in the 1990s. It was initially a phenomenon confined to the UK, although it has since found different articulations across the world (sub-genres such as death rock are US-based). In 1979, Martin Hannett famously described the Manchester post-punk band, Joy Division as ‘Gothic’ and this description spread in the popular media to include a number of bands exploring distinctively gloomy themes. As a music subculture, goth is perhaps most noted by the popularity of the Sisters of Mercy in the 1980s and 1990s (although the lead singer, Andrew Eldritch, rejects any association with goth), but there were many other bands which may be broadly characterised as goth. The Damned, Bauhaus, Specimen, Christian Death, Alien Sex Fiend, The Bolshoi, Clan of Xymox, The Psychedelic Furs, Sex Gang Children, Skeletal Family, Killing Joke, Virgin Prunes, The Cure, Siouxsie and the Banshees, The Fields of the Nephilim and The March Violets are but a few examples from this history. The music is diverse, but is often characterised by a heavy drum beat (on a drum machine), rock guitars, low register male vocals, and as a counterpoint, a high register female voice.

There are many different types of goth style. Traditional or ‘trad. goth’ might be the most recognisable of these, with obvious dyed black hair or artificial colour, mohawks, backcombing, crimping, and make up for men and women highlighting pallid skin tones, dark eyes and lips. Long clothes in fabrics such as velvet and satin would be worn, but also, studded belts, fishnets, leather, PVC and latex, which is a testament to the overlap with punk and BDSM fashion. However since its development in the 1980s, goth has acquired many subgenres. One of the most tenacious of these is cybergoth, where the literary genre of cyberpunk is influential, drawing on more futuristic themes popularised by authors like William Gibson and Philip K. Dick. Bands include VNV Nation, Apoptygma Berzerk, and Covenant, and the sound is much more akin to industrial and dance. This futuristic sensibility also comes through in fashion, with the use of neon and fluorescent colour palettes, cyberlock hair falls (plastic/synthetic hairpieces), goggles and gas masks, and more broadly, an androgynous style. Cybergoth is visible to this day in annual festivals such as Infest, in Bradford (UK) and WGT (Wave-Gotik-Treffen in Leipzig, Germany), which hosts a number of goth subgenres each year. In North America, death rock emerged only slightly later than goth in the UK, and is perhaps identifiable through the iconic and androgynous image of Rozz Williams, founding member/singer with Christian Death who committed suicide in 1998. In many ways, death rock can be seen as a sub-genre of goth, and was to provide an influence for later bands like Nine Inch Nails.

"What at the time seemed like yet another fly-by-night, transitory cult has had remarkable staying power. To this day, more than a quarter of a century on from the Batcave, even the smallest, most isolated village in Britains seems to have a couple of young goths huddling protectively together at the bus shelter." - Ted Polhemus 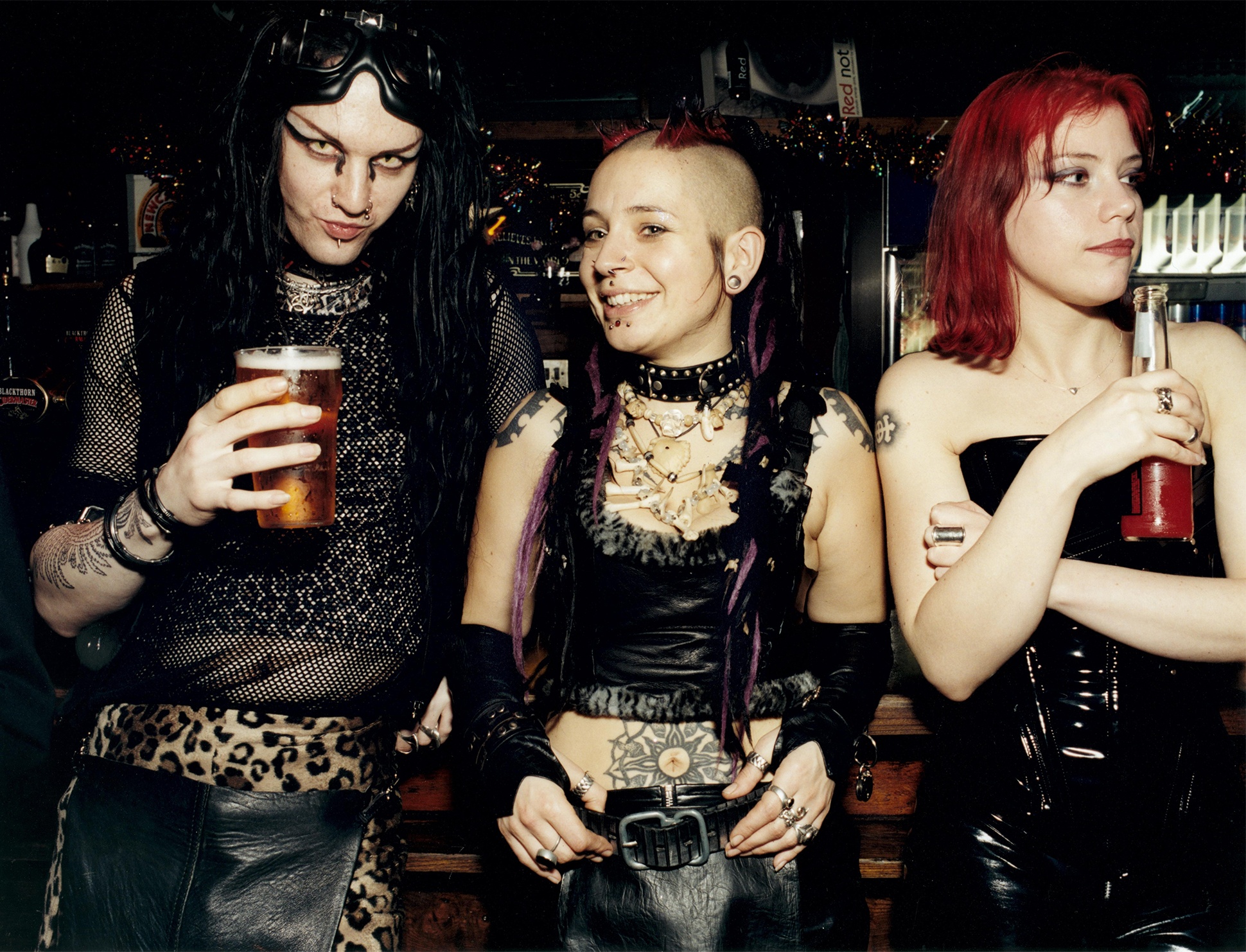 Historically, goth was represented in different geographical locations (UK, Europe, and the US), which reveals the tensions and corollaries between different versions of goth, as well as perhaps the tendency to see goth as a London-centric subculture. The goth scene in England centred on nightclubs in London such as The Batcave, but also in urban locations such as Leeds (Le Phonographique) and Manchester (The Banshee, Underworld). In many instances, the post-industrial landscape of these northern cities provided a focal point for the disenfranchisement of a generation under Margaret Thatcher’s Conservative government. This northern disaffection was reflected in a number of ways, including the Yorkshire flavour espoused by the Sisters of Mercy, who produced a t-shirt bearing the white rose, emblazoned with ‘People’s Republic of West Yorkshire.’ This regional focus is also apparent in Whitby Goth Weekend, which is held bi-annually in the seaside town of Whitby, North Yorkshire, beginning in 1994 with a group of pen pals assembling in the town made famous by Bram Stoker’s novel, Dracula (1897). It has since evolved into a large-scale social event drawing goths from across the country (and further afield).

Despite being primarily a scene which celebrates, and is born of, musical taste and indeed literary discernment (many participants also share an intellectual love of the late eighteenth and nineteenth centuries, poetry, and the arcane), goth subculture is fundamentally ‘spectacular.’ Clothing choices, tattoos, piercings, hair colour, and more generally a ‘dark sensibility’ become a hallmark of goth membership for the wider society and for other subcultural members. Therefore the way participants style themselves, as well as the music they listen to, and what club nights they attend, is important. Today, goth is still visible, both through those young people in the 1980s and 1990s who have since grown up and remained true to the subculture, but also in younger generations today who find something revolutionary and compelling about the music and the clothing of goth.

Claire Nally is a professor at University of Northumbria, researching the modern and contemporary period of English Literature, engaging with Neo-Victorianism and Irish Studies, and a particular interest in subcultures, the graphic novel and gender. 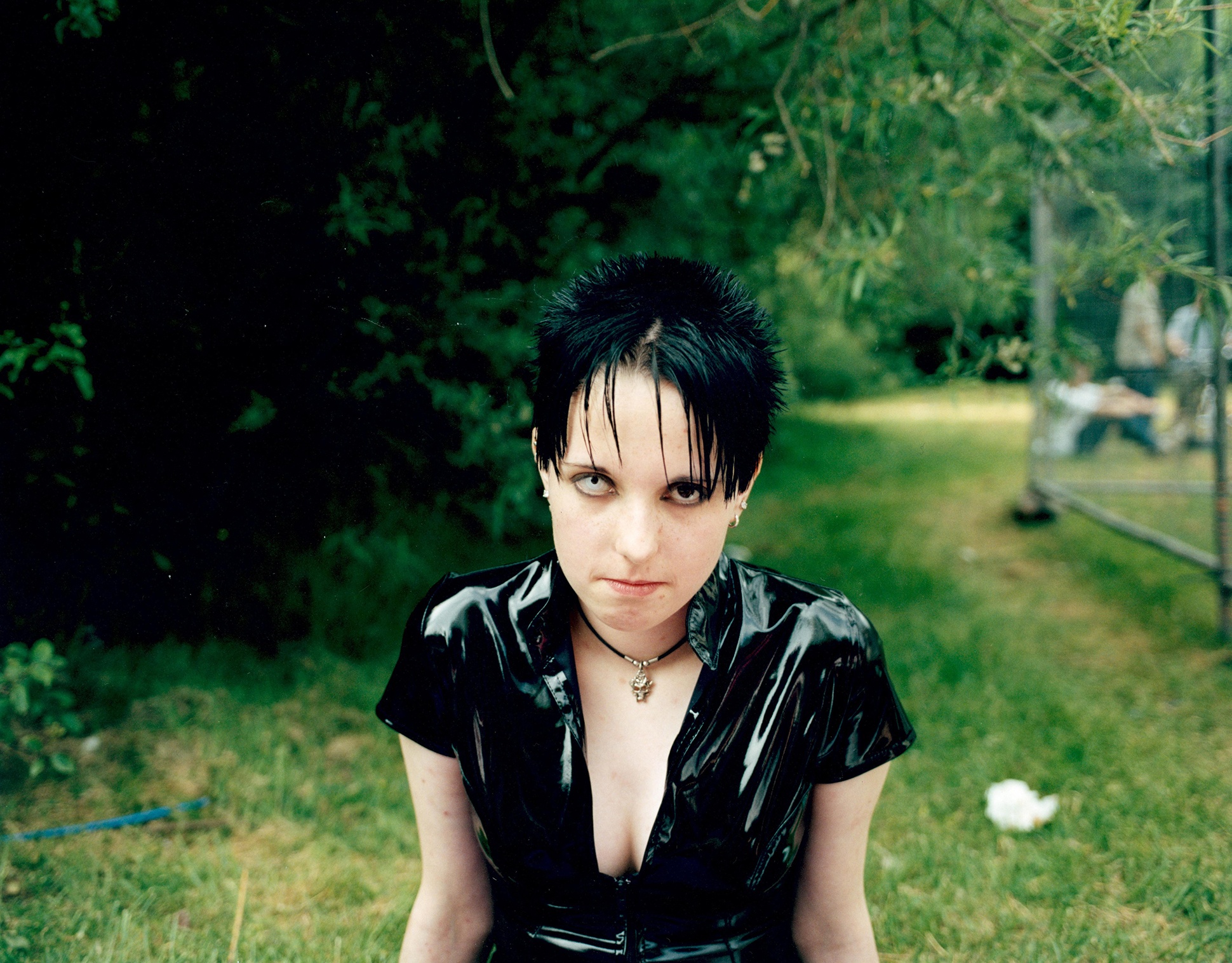